LONDON: English trainers have been forced to do some serious soul-searching since being trounced by their Irish rivals at Cheltenham but hope to restore pride in Saturday's Grand National. 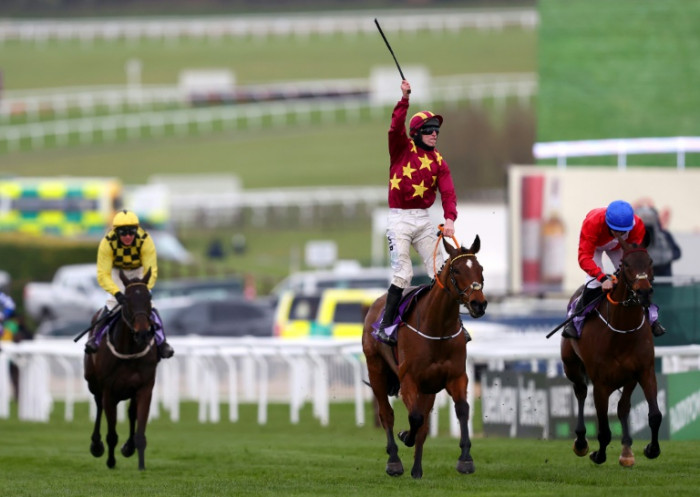 Sports English seek Grand National glory to stem Irish domination published : 7 Apr 2021 at 12:45 writer: AFP Minella Indo won the 2021 Cheltenham Gold Cup as the Irish dominated the festival LONDON: English trainers have been forced to do some serious soul-searching since being trounced by their Irish rivals at Cheltenham but hope to restore pride in Saturday's Grand National. The three-day meeting at Aintree racecourse in northwest England, starting on Thursday, will have the Irish licking their lips in anticipation of another financially rewarding raid. The strong favourite for the National -- arguably the world's most famous race -- is Cloth Cap, trained in England, which offers hope to the home contingent. But Irish-trained horses won 23 of the 28 races over the four days of last month's Cheltenham Festival, jump racing's showpiece event, even though the English provided 60 percent of the runners. "A lot of British-based trainers scratched their heads and asked why did this happen, what is to be done to alter it?" former leading jumps jockey Mick Fitzgerald told AFP. Henry de Bromhead was a major thorn in the side of his English rivals, becoming the first trainer to win the "Holy Trinity" of races. In an unforgettable week for the trainer, Honeysuckle, ridden by Rachael Blackmore, won the Champion Hurdle, Put The Kettle On triumphed in the Queen Mother Champion Chase and Minella Indo won the blue riband Gold Cup. He believes one reason for such overwhelming success is the support racing receives from the Irish government -- it was handed a 14 percent funding increase to 76.8 million euros (pound sterling65.9 million, $91 million) in the 2021 budget. It is estimated the thoroughbred industry employs more than 15,000 people and is worth 1.9 billion euros to the Irish economy. "We are fortunate in that our industry in Ireland is considered a big one and pivotal to many rural businesses like blacksmiths," De Bromhead said. "The government is well aware of that and their support would obviously be hugely beneficial." - 'Sourcing the talent' - Gold Cup and Grand National-winning jockey Fitzgerald and De Bromhead agree a big factor is the talent coming out of point-to-point races. Trainers in Ireland use these as a nursery for horses before they move onto the racing circuit -- they can also be a rich source for those seeking to buy talent. "If you are buying at the top end of the market to race point-to-point in Ireland there is a strong chance you find stars," said Fitzgerald. "If, on the other hand, you are buying but not the cream of the crop you won't find the best horses. It is a case of supply and demand." Fitzgerald says to redress the balance, English-based owners would have to back up the trainers by spending more. "Nicky Henderson and Paul Nicholls are the equals in ability of their Irish rivals," said Fitzgerald. "Same with the jockeys. "However, no matter how brilliant, you are neither going to win races sat on your bum in the changing room because of a lack of a quality ride nor riding ordinary horses. "Irish trainers are doing a very good job of sourcing the talent, there is no two ways about it. If English trainers want to compete they have to buy similar quality horses from France or Ireland." De Bromhead says decent prize money in Ireland also helps to attract owners but adds notable Irish patrons have horses in England. Henderson's two winners at the Festival, the breathtaking Arkle Chase winner Shishkin, and Chantry House, who won the Marsh Novices' Chase, are both Irish-owned, by Marie Donnelly and JP McManus. Both De Bromhead and Fitzgerald say there is an element of the balance of power being cyclical. But the last time the Irish finished on the losing side at Cheltenham was in 2015. The 2019 festival ended in a 14-14 tie. Edmond Mahony, chairman of Europe's premier bloodstock sales company Tattersalls, said the Irish had always prized Cheltenham winners. "I don't really see this as a long-term trend," he said. "I do think it is quite revealing that seven of the nine handicaps run at Cheltenham were won by Irish-trained horses, which I think points to the fact Irish owners and trainers target this particular meeting." Do you like the content of this article?
Read More