LOS ANGELES: Kevin Durant scored 17 points in his timely return from a 23-game injury absence as the Brooklyn Nets clobbered the New Orleans Pelicans 139-111 on Wednesday in New York. 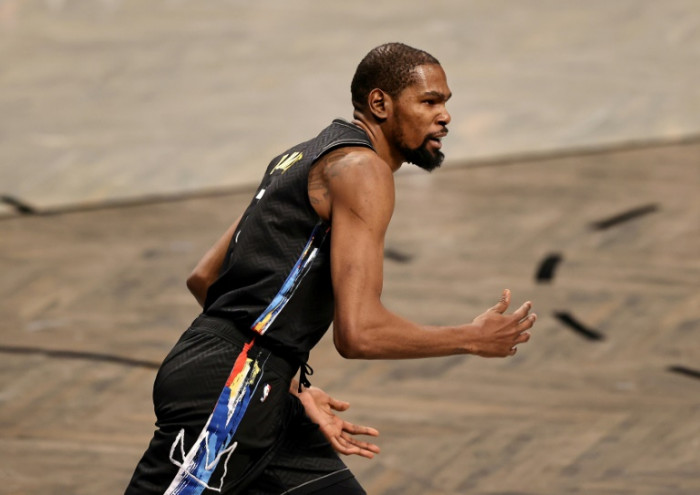 Sports Durant returns to deliver perfect shooting night in win over Pelicans published : 8 Apr 2021 at 10:45 writer: AFP Brooklyn Nets Kevin Durant reacts after his shot and no foul was called against the New Orleans Pelicans in the second quarter at Barclays Center in New York LOS ANGELES: Kevin Durant scored 17 points in his timely return from a 23-game injury absence as the Brooklyn Nets clobbered the New Orleans Pelicans 139-111 on Wednesday in New York. It was a perfect shooting night for Durant whose return came after star point guard James Harden went out with a hamstring injury. Durant shot five of five from the field, five of five from the free throw line and two of two from beyond the arc as he was one of seven Brooklyn players to reach double figures in front of the pandemic-limited crowd of 1,700 at Barclays Center arena. Everything went right Wednesday for the Nets, who led by as many as 38 points. The Pelicans couldn't get going offensively, especially Zion Williamson who had his streak of consecutive games with 20-plus points on 50 percent shooting or better snapped at 25 games. Williamson, who finished with just 16 points on four of 12 shooting from the floor, is tied with former Los Angeles Lakers star Shaquille O'Neal for the longest such streak in the NBA. Williamson was playing in his second game after missing three contests with a sore right thumb. Durant missed the past 23 games with a left hamstring injury and hadn't played since February 13. The Nets were 19-4 while he was out. Harden is expected to be out for at least 10 days with his hamstring issue. Kyrie Irving scored a team high 24 points, LaMarcus Aldridge had 22, Joe Harris scored 14, Chris Chiozza scored 12, and Jeff Green had 11 for the Nets, who had a season-high 37 assists on 51 field goals. With Williamson struggling, Eric Bledsoe led New Orleans with 26 points despite being thrown out after receiving two technical fouls in the third quarter. The Pelicans dug a huge hole by being outscored 43-26 in the second quarter as the Nets cruised from there. Also, Marcus Smart hit a clutch three with 36 seconds left and he scored 14 of his 17 points in the fourth quarter as the Boston Celtics rallied to defeat the New York Knicks 101-99 to break a seventh-place tie in the Eastern Conference standings. Do you like the content of this article?
Read More

Illegal job-seekers caught, but others sneak through

Top players tend to mend swing woes on their own

Teerasil and Diogo take the spotlight

Thais pull out of Thomas and Uber Cups