Horrified holidaymakers found part of a human body caught under their car when they stopped at a petrol station in Trat on Friday morning. 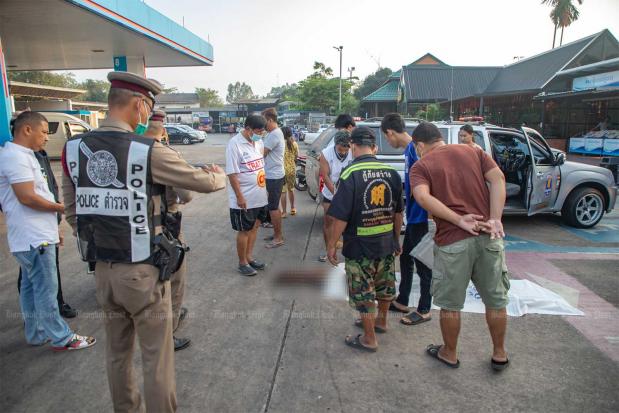 Police and rescue workers inspect the human remains found caught under a holidaymaker's car, at a petrol station in Trat's Khao Saming district on Friday morning. (Photo: Jakkrit Waewkraihong) Horrified holidaymakers found part of a human body caught under their car when they stopped at a petrol station in Trat on Friday morning. There was no damage indicating the car had run into anything. Thai media reported there was a torso , arms and legs, but no head, caught under the car. Driver Saharat Ploykhrut told police that he and nine friends were travelling together in four cars. After entering Trat province, they took a break at the petrol station. One of his friends noticed what looked like a body of some sort under his car, Mr Saharat said. He and his friends thought it was a dead dog. He slowly backed the car off and away from the remains . They were horrified as it was revealed to be a human body. Mr Saharat said he and his friends had seen what they took to be a dog carcass on the road 3-4km before the petrol station. It was dark and they could not see clearly what it was. Mr Saharat’s car had been the last of the four vehicles past the spot. Earlier, rescue workers went to the scene of a reported road accident nearby at about 4.30am on Friday. The rescue workers did not find anything on the road. They began a fresh search later on Friday morning and found parts from a human body scattered along the roadside. The 10 holidaymakers said they would continue their journey to Koh Chang as planned, but in three cars. They would return to the police station to get Mr Saharat's car after their holiday.
Read More

Messi, a 'Classico' and an 'Olympico' - what to watch in Europe this weekend

Covid vaccinations for everyone in Thailand