LOS ANGELES: Denver Nuggets star Nikola Jokic was named the NBA's Most Valuable Player on Tuesday, completing a remarkable rise to the pinnacle of basketball after entering the league in 2014 as a lowly 41st draft pick. 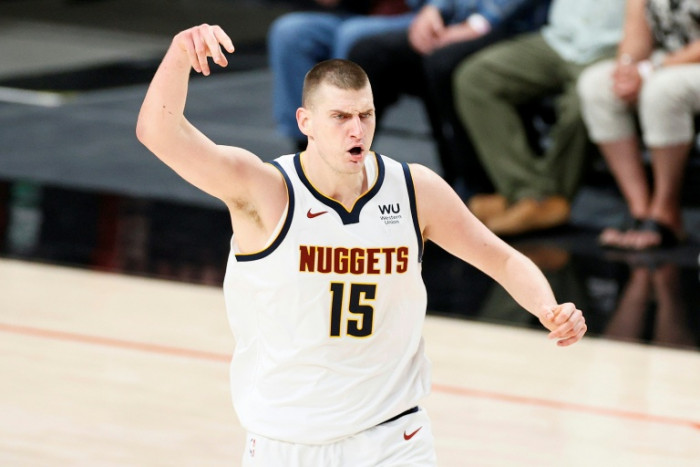 Sports Denver Nuggets ace Nikola Jokic named 2021 NBA MVP published : 9 Jun 2021 at 07:45 writer: AFP Main man: Denver's Nikola Jokic is the 2021 NBA regular season MVP. LOS ANGELES: Denver Nuggets star Nikola Jokic was named the NBA's Most Valuable Player on Tuesday, completing a remarkable rise to the pinnacle of basketball after entering the league in 2014 as a lowly 41st draft pick. The 2.10m Serbian centre scooped the season MVP honours after a 2020/2021 campaign that has seen him average a career-best 26.4 points per game with 8.3 assists and 10.8 rebounds. "Stat wise, you know, I think this was my the best season of my life," Jokic said shortly after the award was announced. "Kind of the cherry on the top is probably the trophy -- so I think this is my the best season of my life." The 26-year-old Jokic is the lowest draft pick ever to win the MVP, and the first player in Denver history to take the accolade. "To be honest, I didn't even think of being in the NBA when I started to play basketball back home," Jokic said. "It was playing Euro League, because that was kind of the closest top league to my country...But then the Denver Nuggets drafted me it was an opportunity for me to become an NBA player, and I think I did a good job of using that opportunity." Jokic is the fifth international player to win the award after Hakeem Olajuwon (1994), Steve Nash (2005, 2006), Dirk Nowitzki (2007) and Giannis Antetokounmpo (2019, 2020). Jokic beat out competition from the Golden State Warriors' Steph Curry and Philadelphia 76ers ace Joel Embiid who were both finalists for the award. Jokic was instrumental in guiding Denver into the second round of the playoffs this season, finishing the regular season 47-25 despite injuries to key personnel including Jamal Murray, P.J. Dozier and Will Barton. Nuggets coach Michael Malone earlier this year praised Jokic for hitting the ground running in the new campaign despite a short off-season following last year's pandemic disruption. "He stayed in great shape and he came back ready to go," Malone said. "He didn’t ease himself into the season. "He came back playing at a high level, and he's done that for every game we've played this year." Jokic agreed with his coach's assessment. "We had a really good season last year and we had like two months rest. I started the season really well and I played kind of the whole season really well." Jokic began his career playing in domestic Serbian competitions before being picked by Denver with the 41st pick of the 2014 draft. He entered the NBA in 2015, a year after being drafted. Jokic, a three-time NBA All-Star, signed a five-year $148 million maximum contract in 2018. At international level he was a member of the Serbia team that won a silver medal at the 2016 Olympic Games in Rio de Janeiro. Do you like the content of this article?
Read More

US state sues to have Google declared a public utility

Roglic in control as Tour heads to high mountains

Somyot firm despite money from Pang