DIJON, France: It may have taken a cracked rib, but Bruno Giraud is now joining a growing number of French riders trying to challenge the business model of meal delivery platforms. 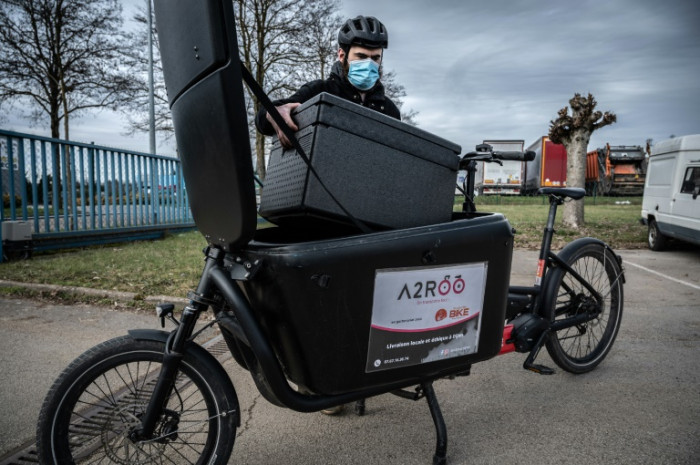 Business Delivery co-op seeks to serve decent work conditions for riders published : 7 Mar 2021 at 13:45 writer: AFP French associations are trying to prove it's possible to pay delivery riders a minimum wage. DIJON, France: It may have taken a cracked rib, but Bruno Giraud is now joining a growing number of French riders trying to challenge the business model of meal delivery platforms. Giraud, 40, initially found it cool that he could cycle for his job by delivering meals for Uber Eats and Deliveroo in the central French city of Dijon. But he was soon disenchanted with working conditions that are "not far from slavery" with no guaranteed minimum number of work hours or minimum wage. "Before, one could make 70 euros a night but they recruit more and more deliverers and there aren't enough orders, so the price of a delivery drops. It has become really abusive," Giraud said. Delivery platforms have seen a boom in business thanks to the Covid-19 pandemic, as demand has soared in countries where restaurants have closed. The revenue of Anglo-Dutch Just Eat jumped more than 50 percent last year, while UK-based Deliveroo on Thursday unveiled plans to enter the stock market with a valuation that could exceed $7 billion. But the platforms have come under increasing criticism for not offering work contracts and benefits. A United Nations report last month called for urgent international regulations to ensure fair conditions for workers paid via platforms, noting that the rising competition was in some cases forcing people to accept less money per job than before. The Uber ride-hailing platform lost a legal battle in Britain in February that should see its freelance drivers receive contracts. Giraud knows well what not having a work contract means. After he skidded and fell a few months ago, cracking a rib, as a freelancer he wasn't entitled to any paid sick leave during the week he couldn't ride. His dream of buying a home would have also likely remained a dream as French banks don't like to lend to borrowers without a work contract. But Giraud and former programmer Xavier Caron decided to form a cooperative -- A2ROO -- that provides riders with a proper work contract and decent working conditions. "We want to offer riders the security that a work contract brings with unemployment insurance and coverage in case of an accident," said Caron, who heads up the association that pays its riders the minimum wage and provides them with a work bicycle. "A work contract, that changes things a lot," said Cyril Jeanpierre, a rider in Dijon. Jeanpierre was earning the equivalent of the minimum wage when he started riding for other platforms, taking home 1,500 euros per month before taxes. But with the proliferation of riders, it fell by a third. A2ROO's social model is also good for clients and restaurants, said chef David Zuddas at the Dijon restaurant DZ'envies. He said other platforms demand restaurants pay a commission of 25 to 30 percent of the value of an order, whereas it is just 10 percent for A2ROO. "It's out of the question that I take part in the exploitation of people by others," said Zuddas, who also participated in the creation of A2ROO. Caron said that for an order of 40 euros, for example, other platforms would take 13 euros in commission but only pay their freelance delivery rider three euros. With just five riders, A2ROO is still just a minnow. But Caron hopes the cooperative will become profitable this year and already sees the model as a success. A2ROO is far from the only such initiative. The federation CoopCycle says there are already 35 in France and some have grown to as many as 40 employees. "We prove each day that a salary model in this business is not only possible, but that it is less costly and provides better service," said CoopCycle's coordinator, Adrien Claude. "It works," he added. Certain platforms are coming around and hiring staff. Just Eat announced last year it wants to end relying upon independent riders who are left in a precarious situation. In January, its French unit said it planned to hire 4,500 riders as employees, offering contracts from 10 hours to full time and paying the minimum wage. Jerome Pimot, a spokesman for an association of independent delivery riders in Paris called CLAP, said it is perhaps too early to break open the champagne. "Nevertheless, it proves that it is possible to have employees, which is something that platforms have denied," he said. The French government plans to issue a decree soon on social coverage for platform workers, but CoopCycle's Claude doesn't have high expectations. "If it is the delivery riders who have to pay for their social insurance contributions, that will lower their take home pay and they'll refuse," he said. Do you like the content of this article?
Read More

China exports spike to highest in decades after Covid-19 hit

Major to launch low-rise projects aimed at the rich

Dim prospects for employment recovery in latter half