A report has determined it will take Thailand two years to reach herd immunity for Covid-19 at the current rate of vaccination. 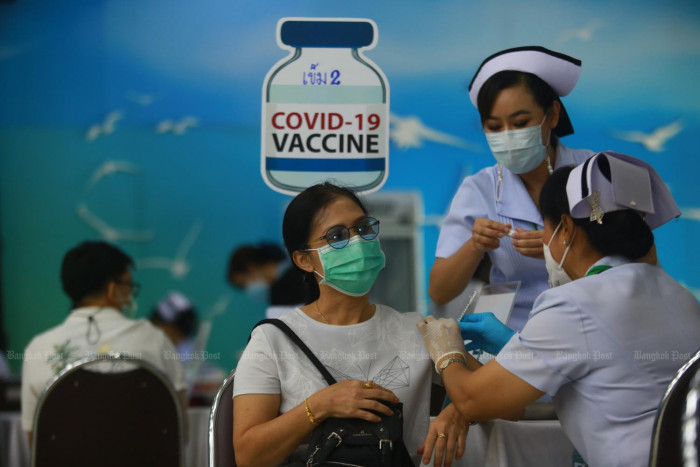 Learning Really easy news Covid vaccine increase urged published : 5 May 2021 at 12:54 writer: R May ORIGINAL SOURCE/WRITER: William Hicks Medical workers administer the second dose of Covid-19 vaccine to people at Samutprakan Hospital. Somchai Poomlard A report has determined it will take Thailand two years to reach herd immunity for Covid-19 at the current rate of vaccination. However, according to analysis by Deutsche Bank, if local vaccine production plans are expanded and vaccination rates increase, hope remains for a quicker timeline . As of April 28, 1.5% of Thais have had at least one shot of a vaccine, while about 59,000 people have been infected with Covid-19 and survived, meaning those Thais should have some level of immunity to the virus. According to Michael Spencer, chief economist for Asia-Pacific at Deutsche Bank and author of the report, Thailand could reach herd immunity in which 70% of the population have some form of immunity by the end of this year -- if the country increases vaccine administration by three times the current rate, or 190,000 shots per day. This rate is unlikely however, said Mr Spencer, as the government aims to vaccinate only 50% of the population by the end of the year. Even so, Thailand remains in a favourable position compared with its regional peers despite lagging in vaccination, he said. "Thailand looks to be in a better position than other Asean countries, other than Singapore," said Mr Spencer. "It is ramping up vaccinations much faster and could begin reaching higher percentages of the population, while vaccine rollout is slowing in places like Malaysia." According to the report, vaccination numbers are falling in Malaysia and not increasing as fast as expected in Indonesia and the Philippines. Mr Spencer added Thailand has a greater economic incentive than most nations to achieve herd immunity because of its reliance on tourism. Achieving 70% immunity in the population would mean Thailand could safely reopen to foreign travellers without risking an outbreak among vulnerable populations. Search Copy Search Copy Vocabulary administer (verb) : to give drugs, medicine, etc. to somebody - ให้ (ยา), จ่ายยา analysis : the detailed study or examination of something in order to understand more about it; the result of the study - การวิเคราะห์ despite (prep) : used to show that something happened or is true although something else might have happened to prevent it; used to show that somebody did not intend to do the thing mentioned - ถึงอย่างไรก็ตาม, ทั้ง ๆ ที่ expand : to make or become larger (noun form: expansion) - ทำให้กว้าง, ทำให้ขยาย favourable : good for something and making it likely to be successful or have an advantage - ซึ่งอำนวยประโยชน์ herd immunity : when most of a population is immune to an infectious disease - lagging : moving or advancing so slowly that you are behind other people or things - ล้าหลัง ramp up : to make something increase in amount or strength; to make larger; to scale up; to escalate - ยกระดับ; เสริม timeline : a plan of when something should happen or how much time something should take - unlikely : not expected to happen; probably won’t happen - ที่ไม่น่าจะเกิดขึ้น urge (verb) : to advise someone very strongly about what action or attitude they should take - วิงวอน ย้ำเตือน vulnerable : easily damaged or harmed - ซึ่งถูกทำลายได้ง่าย Do you like the content of this article?
Read More