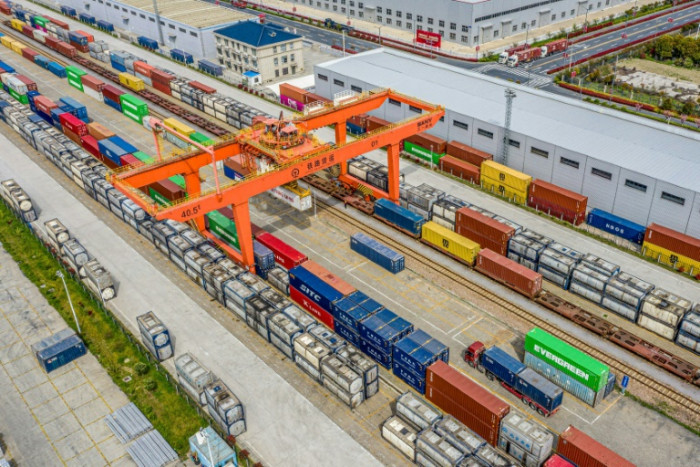 Business China's imports pick up further, exports strong in March published : 13 Apr 2021 at 12:45 writer: AFP Chinese trade data continues to improve as the global economy emerges from last year's crisis. BEIJING: China's imports and exports boomed again in March, data showed Tuesday, reaffirming the recovery in the world's number-two economy continues apace and demand picks up in key overseas markets as they emerge from last year's virus crisis. The readings highlight the impact of vaccines and the easing of containment measures are having, with expectations for further improvement over the next few months. Imports soared a forecast-busting 38.1% on-year as the country's army of consumers increasingly return to some form of normality after last year's crisis forced businesses to shut and people to stay at home. The figure was a huge increase from the 22.2% rise seen in January-February and the biggest hike since February 2017. Exports rose 30.6%, well off the 38% increase tipped in a Bloomberg forecast but still among the highest readings since early 2018. Overseas shipments jumped more than 60% in January-February. The outsized increases are down to the fact that they are compared with a low base level from last year, when the pandemic was at its height in China and spreading elsewhere. Iris Pang, ING chief economist for Greater China, said export numbers were "very distorted". But a key factor behind the imports spike was electronics shipments, she said, noting that Taiwan's recent water shortage had hampered its ability to produce at overcapacity. "They are exporting some semiconductor parts to (mainland) China, to finish production there," she said. Integrated circuit imports surged 33.6% in the first quarter, while that of diodes and similar semiconductor devices rose more than 50%, customs data showed. "We're still seeing stocking up... in terms of electronic integrated circuits", said OCBC Bank's head of Greater China research Tommy Xie. This suggests preparation "for a potential technology war between China and the US" or further tensions between the countries. A rise in commodity prices recently would also have bumped up import values, analysts said. China's overall trade surplus was $13.8 billion, the customs data showed, while its surplus with the United States climbed about 40% to $21.4 billion. The US trade surplus was a key point of contention during the trade war with former US President Donald Trump. "China has demonstrated very resilient growth, to become the global industrial powerhouse supplying goods during the pandemic," Xie said. He added this was likely to continue, given constraints on supplies globally and international demand picking up as the economic outlook improves. Do you like the content of this article?
Read More

Bauer shuts eight magazines in Australia due to virus downturn