HONG KONG: A three figure percentage increase in the number of trips undertaken in China during the recent three-day weekend points towards an "orderly recovery" of the domestics tourism industry, further underlining post-coronavirus recovery in the world's second largest economy. 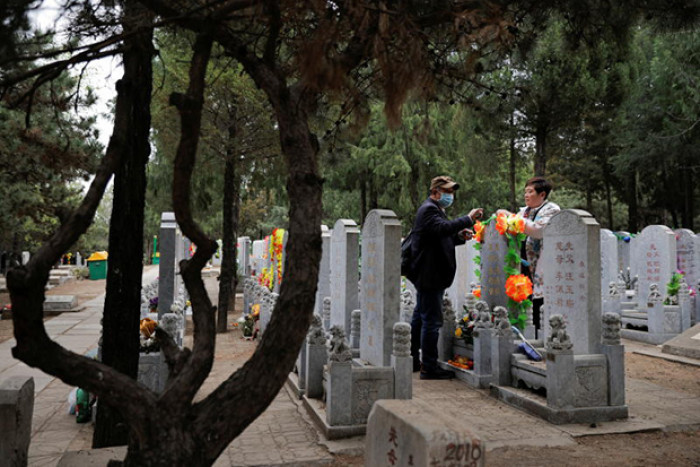 Business China's domestic tourism industry on course for 'orderly recovery' Ching Ming Festival boosts travel, box office revenues published : 7 Apr 2021 at 15:05 writer: South China Morning Post People decorate a grave on the Tomb Sweeping Day, or Ching Ming Festival, at a graveyard in Beijing on Monday. (Reuters photo) HONG KONG: A three figure percentage increase in the number of trips undertaken in China during the recent three-day weekend points towards an "orderly recovery" of the domestics tourism industry, further underlining post-coronavirus recovery in the world's second largest economy. The Ching Ming Festival, more widely known as Tomb-Sweeping Day, took place in China on Monday, and according to data from the Ministry of Culture and Tourism, 102 million trips were recorded over the extended three-day weekend. This represented an increase of 144.6% year on year, while tourism revenue rose 229% year on year to 27.2 billion yuan (130 billion baht), although the surge in percentage terms is due in part to the low comparison base from the same period last year when the coronavirus tore through the world's second-largest economy. In terms of pre-coronavirus levels, the number of trips recorded reached around 94.5%, while tourism revenues were at 56.7%. "The domestic tourism market is on the way to orderly recovery. Currently, short-distance travel accounts for a large proportion, and there are lots of ticket waivers. It still needs some time to fully return to normal," the Ministry of Culture and Tourism said, according to various state media outlets. China's overall transport system carried 145 million passengers during the three-day holiday, an increase of 142% from a year earlier, with 4.3 million passengers travelling by air, according to the Ministry of Transport. Tourism has been one of the most hard hit sectors as lockdowns, a widely used measure in China to prevent the spread of the coronavirus, greatly disrupted travel plans and saw the sector's revenues plunge by 61.1% last year. Domestic travel in China largely faces few restrictions now, as the vast majority of citizens can provide health bar codes and the nationwide vaccination programme is in full swing despite a recent flare up in cases in Ruili, a city on the border with Myanmar. This has led to strong growth in consumption and entertainment, with box office revenues surpassing 800 million yuan (3.8 billion baht) over the long weekend, a record for the holiday. On Tuesday, the Caixin/Markit services purchasing managers' index (PMI) also rose to 54.3 in March, the highest since December, from 51.5 in February, highlighting the recovery in the sector. "The Covid-19 flare-ups that occurred in the fall and the winter have basically died down, and the services sector has quickly recovered with supply and demand expanding," said Wang Zhe, a senior economist at the Caixin Insight Group. Beijing is looking for such holidays to boost consumption, which is lagging behind the recovery seen in the manufacturing sector. China's retail sales rose by 33.8% in the first two months of the year, again thanks to the low comparison base, with Mizuho Securities expecting a 27% increase in March when figures are released later this month. "We have been looking for a solid rebound in China's economic indicators in March. Apart from favourable seasonality, business sentiment also helped those major infrastructure and manufacturing investment projects unveiled in China's 14th five-year development plan starting this year," said Mizuho Securities economist Serena Zhou. Do you like the content of this article?
Read More

Taiwan says will fight to the end if China attacks

Foreign cricketers 'give up' on mental health in pandemic: Ganguly

May factory output down 23%