PHNOM PENH: Cambodia has temporarily stopped the import of pigs from its neighbours Thailand and Vietnam, due to an outbreak of African swine fever (ASF). 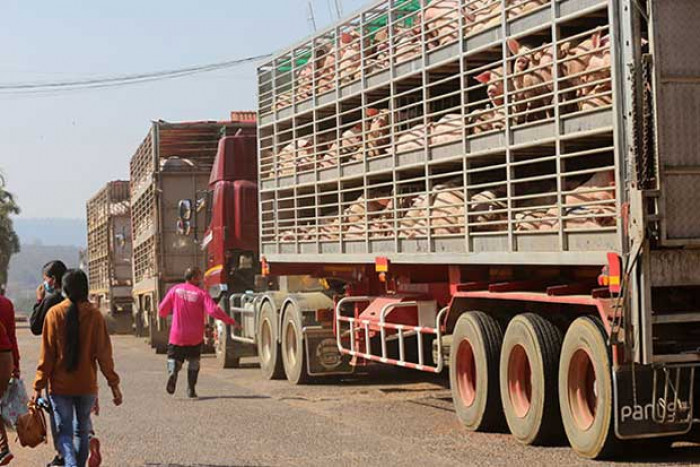 PHNOM PENH: Cambodia has temporarily stopped the import of pigs from its neighbours Thailand and Vietnam, due to an outbreak of African swine fever (ASF).

The decison came after after the Department of Livestock Development of Thailand on Tuesday detected an ASF case in a slaughterhouse in Nakhon Pathom, raising concerns for breeders across the country, the Khmer Times reported on Friday.

“Cambodia is taking strict measures to test all imported pigs from those countries with cases of this virus, but now we have totally banned importing them,” Tan Phanra, director of the Department of Animal Health at the Cambodian Ministry of Agriculture, told the Khmer Times.

“If we find that pork supply levels in the country get too low, then we will be able to import some, but strenuous checks will be made at the border,” he added.

Import certificates will be issued to recognised importers, but they will still be subject to testing.

“I will work more with the livestock association and importers to determine how long more we will need to suspend the import of pigs,” said Phanara. “We don’t want the virus to have an impact on the livestock we have in Cambodia.”

Cambodia used to import 8,000 to 9,000 pigs per day from Thailand and Vietnam, but with more local breeders entering the business, these numbers have fallen. “Now that African swine fever has been detected, we are having to be especially careful,” Phanara added.

Banteay Meanchey province, which borders Sa Kaeo in Thailand, has the most imports of pigs, through the international checkpoint at Poipet.

Taiwan reported on Wednesday that it has banned pork and pork products from Thailand.

Thailand had earlier banned swine exports from Jan 6 to April 5 in an attempt to end the soaring price of pork in the country.

The size of the country’s pig herd has fallen by more than 30% over the past year, driving down pork supplies and pushing up prices. Farmers said ASF was to blame in some cases but Agriculture Ministry officials insisted pig deaths were being caused by another virus called porcine reproductive and respiratory syndrome (PRRS).

They finally changed their story after veterinarians at Kasetsart University confirmed that a miniature pet pig in Bangkok was found to have died from ASF. They said they had sent their findings to the ministry last month but never heard a reply.

ASF does not harm humans but it is fatal for pigs and no vaccine is available to treat it.

AssetWise ploughs ahead with Ramkhamhaeng condo