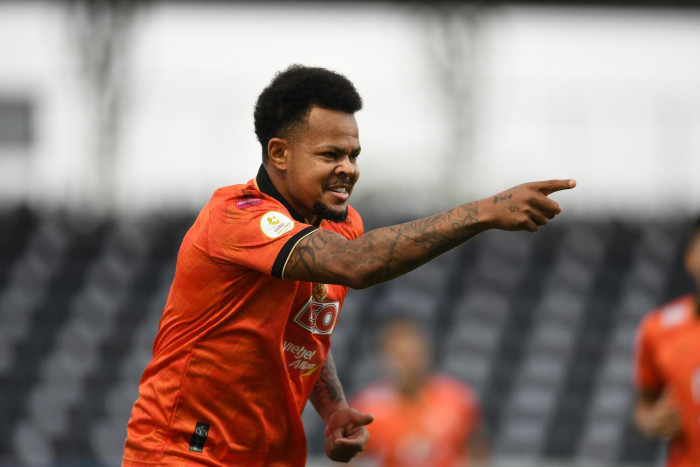 Sports Bill double keeps Beetles' ACL bid on track published : 22 Feb 2021 at 04:30 newspaper section: Sports writer: Tor Chittinand Chiang Rai's Bill Rosimar reacts after scoring a goal against Rayong on Sunday night. Brazilian striker Bill Rosimar fired home two goals to help defending champions Chiang Rai United stay in contention for a place in the 2021 Asian Champions League with a 3-2 victory over visiting Rayong on Sunday night. Chiang Rai are now in a three-team cluster, also comprising SCG Muang Thong United and Samut Prakan City, which occupies fourth spot with 32 points each. The Beetles, however, have a game in hand. The top two teams in Thai League 1 will earn places in group stages of the Asian Champions League while the remaining two spots reserved for Thailand in the tournament will go to the third-placed side in the league and winners of this year's FA Cup competition. Bill was on target for the Beetles in the fourth minute and by the time the match had reached the 10-minute mark, the hosts were two goals ahead thanks to a second by Brinner Henrique. Chiang Rai held their opponents goalless in the first half but Rayong got the opportunity they had been looking for shortly after the break. Rayong striker Metee Sarakum was brought down inside the box by Chiang Rai goalkeeper Saranon Anuin and Goshi Okubo converted the penalty to reduce the deficit for Rayong. Chiang Rai struck again in the 76th minute when Ekanit Panya let the ball roll on to Bill to make it 3-1 for the hosts. Goshi claimed his second goal of the night eight minutes from time but it failed to spark a recovery by Rayong. Hosts Samut Prakan City trounced PT Prachuap 4-0 on the back of a hat-trick from Barros Tardeli last night. Apichai Munotsa netted the first for the home team in the fourth minute before Barros added three more to their tally in the 21st, 57th and 82nd minutes. Hosts Chonburi edged Police Tero 1-0 and Sukhothai were held to a 0-0 tie by visiting Nakhon Ratchasima. Do you like the content of this article?
Read More

Lean left to get those chips right