Bangladesh: 'No obligation' to help Rohingya at sea

DHAKA: Bangladesh is under “no obligation” to shelter 81 Rohingya Muslim refugees adrift for almost two weeks on the Andaman Sea and being assisted by neighbouring India, said Bangladesh foreign minister AK Abdul Momen. 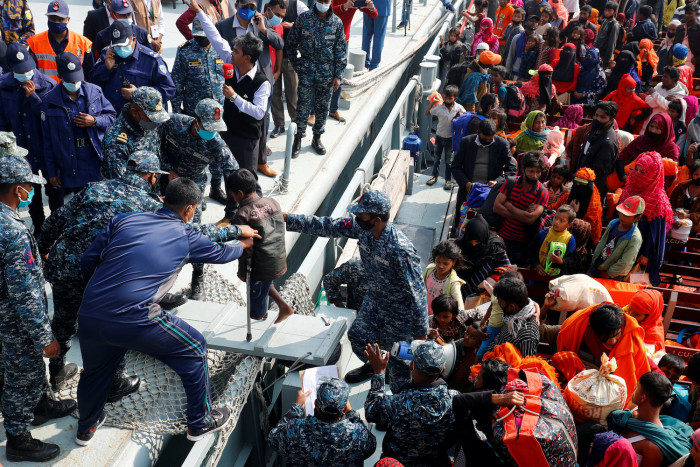 World Bangladesh: 'No obligation' to help Rohingya at sea Dhaka expects India or Myanmar to take refugees adrift in Andaman for nearly two weeks published : 27 Feb 2021 at 18:39 writer: Reuters Bangladesh Navy personnel help a Rohingya child out of a navy vessel that was taking refugees to be resettled on Bhasan Char island in December. (Reuters File Photo) DHAKA: Bangladesh is under “no obligation” to shelter 81 Rohingya Muslim refugees adrift for almost two weeks on the Andaman Sea and being assisted by neighbouring India, said Bangladesh foreign minister AK Abdul Momen. The Indian coast guard found the 81 survivors and eight dead crammed onto a crippled fishing boat and were trying to arrange for Bangladesh to take them, Indian officials said on Friday. But Momen told Reuters late on Friday that Bangladesh expects India, the closest country, or Myanmar, the Rohingyas’ country of origin, to accept them. “They are not Bangladesh nationals and in fact, they are Myanmar nationals. They were found 1,700 kilometres away from the Bangladesh maritime territory and therefore, we have no obligation to take them,” said Momen, who is in the United States. “They were located 147km away from Indian territory, 324km away from Myanmar,” he said by phone, adding that other countries and organisations should take care of the refugees. Indian foreign ministry officials did not respond to requests for comment. External Affairs Ministry spokesman Anurag Srivastava said on Thursday that India was “in discussions with the Government of Bangladesh to ensure their safe and secure repatriation”. India’s foreign ministry did not respond to requests for comment on whether it would accept the refugees onto Indian soil. One senior Indian official, who declined to be named as he was not authorised to discuss the matter with media, said India planned to help the refugees with food and water, but it was not planning to take them ashore. New Delhi did not sign the 1951 Refugee Convention, which spells out refugee rights and state responsibilities to protect them. Nor does it have a law protecting refugees, though it currently hosts more than 200,000, including some Rohingya. More than 1 million Rohingya refugees from Myanmar are living in teeming camps in Bangladesh, including about 700,000 who fled after the Myanmar military conducted a deadly crackdown in 2017. Traffickers often lure Rohingya refugees with promises of work in Southeast Asian countries like Malaysia. The United Nations High Commissioner for Refugees (UNHCR) expressed alarm this week over the missing boat. India on Thursday said around 47 of the occupants of the boat are in possession of ID cards issued to them by the UNHCR office in Bangladesh, stating that they are displaced Myanmar nationals. The refugees have been drifting in international waters after leaving southern Bangladesh on Feb 11 in the hope of reaching Malaysia. On Saturday, they were under the aid and surveillance of India as officials were holding talks to return them to Bangladesh, said the senior Indian official who is not authorised to speak to the media. The boat, which sailed from the massive Cox’s Bazar refugee camp, was carrying 56 women, eight girls, 21 men and five boys. Many of the survivors, according to Indian officials, were sick and suffering from extreme dehydration, having run out of food and water after the boat’s engine failed four days into their journey. “Has Bangladesh been given the global contract and responsibility to take and rehabilitate all the Rohingya or boat people of the world?” Momen said. “No, not at all.” Momen said the UNHCR should also take responsibility as many people on the boat hold ID cards from the UNHCR office in Bangladesh. “If (the refugees) are UNHCR card holders, why did they allow traffickers to take their card holders to adrift on the high sea leading to death?” UNHCR officials were not immediately reachable for comment. Keywords Rohingya Myanmar Bangladesh refugees Do you like the content of this article?
Read More

WHO warns of pressure on Latin American health systems

Over 1% of humanity displaced: UN