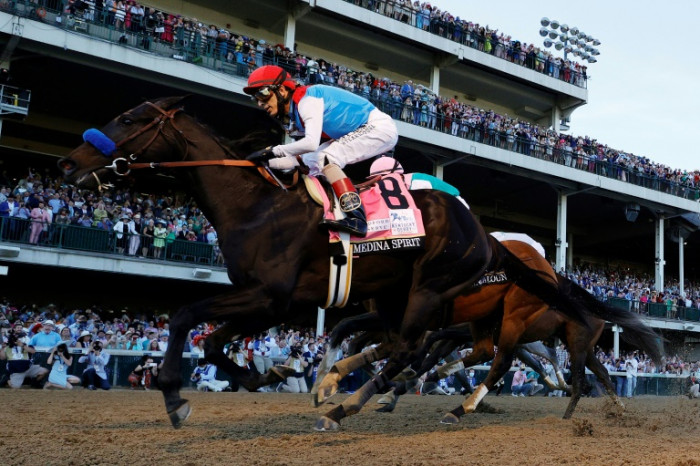 Sports Baffert makes history as Medina Spirit wins 147th Kentucky Derby published : 2 May 2021 at 07:45 writer: AFP Medina Spirit, ridden by jockey John Velazquez, wins the 147th Kentucky Derby. WASHINGTON: Medina Spirit won the 147th Kentucky Derby Saturday at Churchill Downs, giving trainer Bob Baffert a record seventh victory in the US flat racing classic. Puerto Rican jockey John Velazquez piloted Medina Spirit to the front early and held on to win the first jewel of US racing's Triple Crown for the fourth time as overwhelming pre-race favorite Essential Quality finished fourth. "I cannot believe he won this race," Baffert said of 12-1 shot Medina Spirit, who was second in his previous start in the Santa Anita Derby on April 3. "He won this race. That little horse, it was all guts," Baffert said after Medina Spirit won by half a length over Mandaloun. It was a second straight Derby victory for Baffert and Velazquez, who won with Authentic last September in a race postponed because of the Covid-19 pandemic. There was a celebratory air at Churchill Downs in Louisville, Kentucky, as the Derby returned to its traditional slot on the first Saturday in May, and welcomed an announced crowd of 51,838. That's well below the 150,729 who attended the 2019 race, but more than enough to return the sense of occasion to an event run without fans in attendance last year. Big hats were back, along with celebrities in the crowd including NFL stars Tom Brady and Aaron Rodgers. Velazquez said he and Baffert had decided to take Medina Spirit to the front early, and the strategy paid off. The colt broke sharply from the eighth post as Essential Quality and second choice Rock Your World bumped early. Mandaloun briefly hit the front but Medina Spirit wouldn't be denied. "Johnny had him in a perfect spot, and if you have him on the lead he'll fight," Baffert said. Mandaloun, a 28-1 shot trained by Brad Cox and ridden by US-based French jockey Florent Geroux, applied the most pressure but couldn't get the job done. Hot Rod Charlie, trained by Doug O'Neill and ridden by another US-based Frenchman, Flavien Prat, was third, another half a length back. The bigger disappointment for Cox, who was trying to become the first Louisville-born trainer to win the Kentucky Derby, must be the failure of Essential Quality. Unbeaten in five prior starts, the gray colt owned by Dubai ruler Sheikh Mohammed bin Rashid al Maktoum's Godolphin stables left the global racing and breeding powerhouse still seeking a Kentucky Derby win after 12 attempts. Essential Quality made a late charge on the outside, but was fourth by a head. It was a blow, too for Essential Quality jockey Luis Saez, who was looking for Derby redemption after hitting the wire first in 2019 aboard Maximum Security only to be disqualified for interference. Instead, it was 49-year-old Velazquez watching them drape the blanket of roses over his mount's withers. "It just doesn't get old," Velazquez said. "The pleasure is to be here and to win it again. I want to come back next year again!" Baffert moved out of a tie with legendary trainer Ben Jones for most career Kentucky Derby wins. His six prior winners of the 1 1/4-mile race for 3-year-olds at Churchill Downs included Triple Crown winners Justify and American Pharoah. Baffert admitted he didn't have the same kind of expectations for Medina Spirit that he had for those greats. "I'm so spoiled bringing these heavy duty horses here," he said. "But that little horse has such a heart." The Triple Crown chase resumes on May 15 with the Preakness at Pimlico in Baltimore, and concludes June 5 with the Belmont Stakes in New York. Do you like the content of this article?
Read More

Thousands mark May Day in France, Spain and Berlin

US Open champion Osaka withdraws from French Open with...