SONGKHLA: Crystal methamphetamine worth about 135 million baht has been seized from a room at a resort in Muang district and four suspects later arrested. 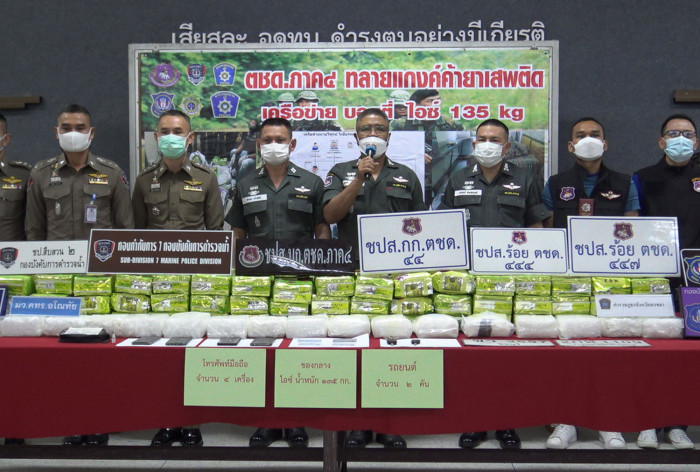 Thailand General B135m of crystal meth seized at resort published : 10 Jun 2021 at 16:28 writer: Assawin Pakkawan Packages of crystal methamphetamine totalling 135kg sized from a resort room, displayed during a media briefing in Songkhla on Thursday. (Photo: Assawin Pakkawan) SONGKHLA: Crystal methamphetamine worth about 135 million baht has been seized from a room at a resort in Muang district and four suspects later arrested. The arrests followed information about a delivery of drugs from Chon Buri province to a customer in Tak Bai district of Narathiwat, Pol Col Phahol Ketkaew, deputy chief of Border Patrol Police Region 4, said at a media briefing on Thursday. Border patrol police had raided a room at Kaoseng resort in tambon Khao Roopchang in Muang district of Songkhla on June 8, following reports that members of the gang had checked in there. There was no-one in the room, but there were several fertiliser sacks found to contain 135kg of crystal meth worth about 135 million baht, Pol Col Phahol Ketkaew said. The officers later tracked down four suspects and arrested them in Songkhla and Nakhon Si Thammarat provinces. They seized two cars and four mobile telephones as evidence. Police held three men - Withoon Wichianpong, 23 of Chon Buri, Akkhawin Sawad-aksornchuen, 22 of Chon Buri, and Panupong Permcharoen, 32 of Samut Sakhon - and a  woman, Orawan Thuenbamrung, 24, of Bangkok. During questioning, the four allegedly confessed to having been hired by a man identified only as Boy, alias Tee, in Chon Buri. The drugs were intended for delivery in Tak Bai district of Narathiwat. Someone was supposed to collect the consignment from the resort room. They said they were being paid 300,000 baht. The four were held in police custody for legal action on drug charges. The investigation was being extended. Keywords Drug smuggling crystal meth Songkhla Do you like the content of this article?
Read More

Thailand launches website for foreigners to register for vaccinations