At the crossroads of time

The sound of a cock crowing signals the start of the day as hundreds of sellers raise their colourful umbrellas and stock their booths with a variety of fresh vegetables, fruits and meats from local farms. 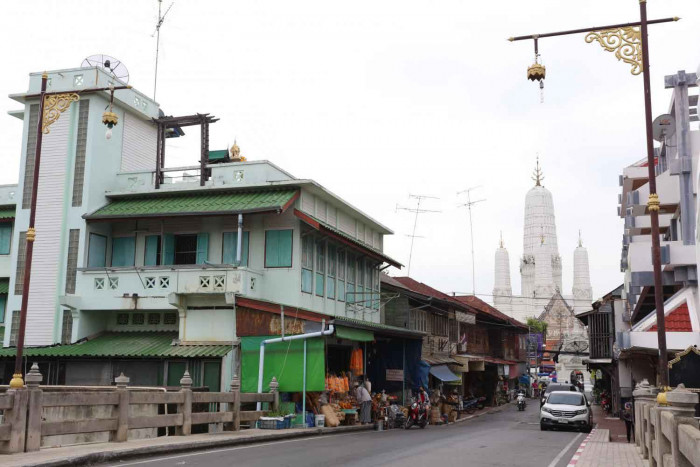 At the crossroads of time

Situated on the banks of Phetchaburi River, the Sampheng community blends modernity with Buddhist and Chinese heritage

published : 19 May 2022 at 04:00
newspaper section: Life
writer: Pattarawadee Saengmanee
The riverbank communities of Phetchaburi have managed to maintain their traditional way of life. (Photo: Saranyu Nokkaew)

The sound of a cock crowing signals the start of the day as hundreds of sellers raise their colourful umbrellas and stock their booths with a variety of fresh vegetables, fruits and meats from local farms.

My travel companions and I skipped the hotel's American breakfast in favour of traditional gastronomic pleasures in the classic setting of the coastal town. We wanted something basic like congee with pork blood tofu, minced pork, entrails and a soft-boiled egg, served in red sauce. Deep-fried dough sticks, which go well with hot coffee and soy milk, sold out rapidly, while Chiam Liang Sie shop delighted early birds with tender barbecued pork and Chinese pork belly with rice.

Formerly known as the Sampheng community, the old market on the banks of the Phetchaburi River has kept a modern business atmosphere while transporting tourists back 200 years to when Chinese migrants arrived in Phetchaburi.

Hokkien people focused on trading forest goods while the Teochew generally worked as labourers before moving onto commerce. In the past, this area was a major trading centre, bordered by fabric and agricultural tool shops as well as food wholesalers. 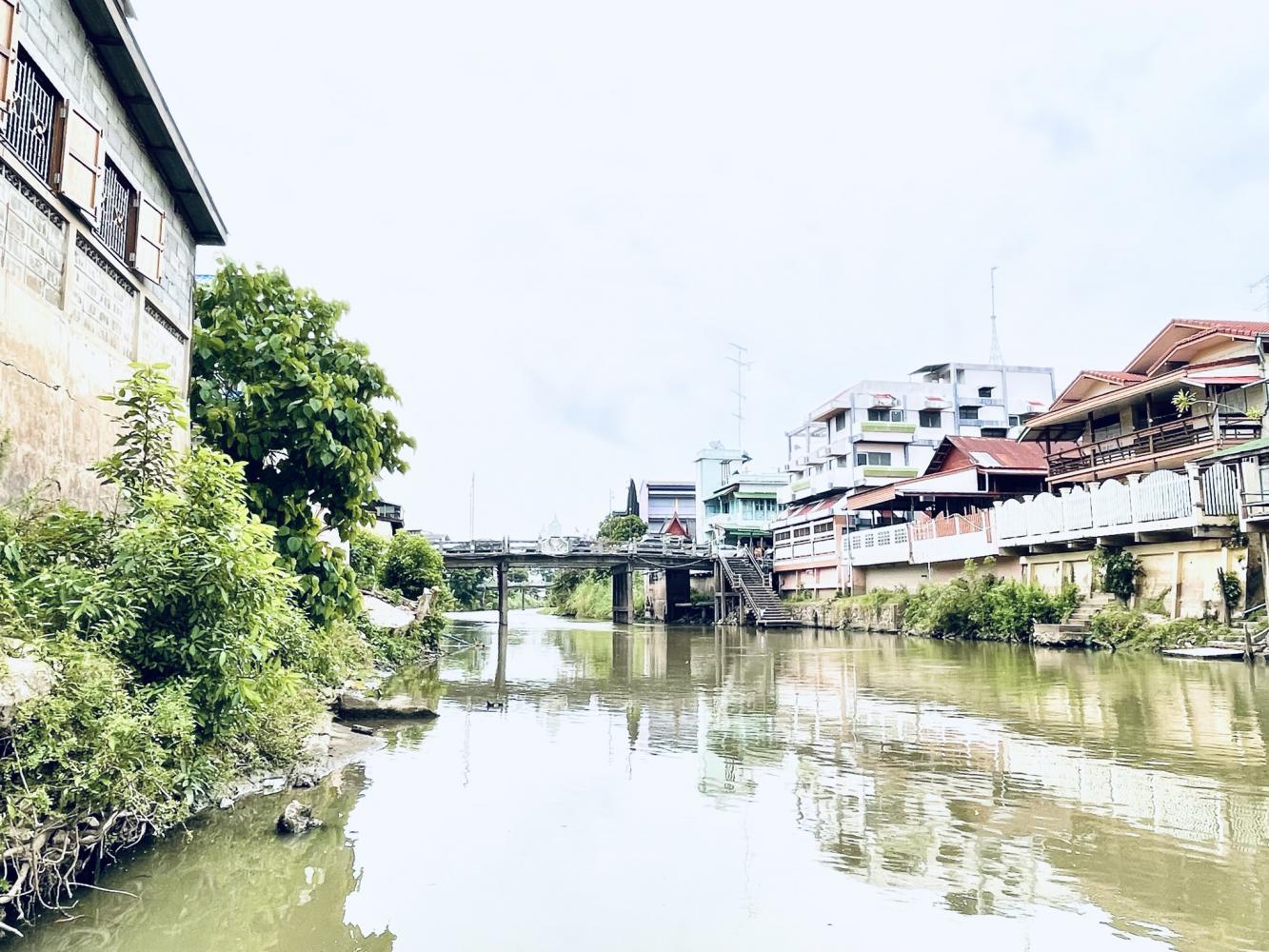 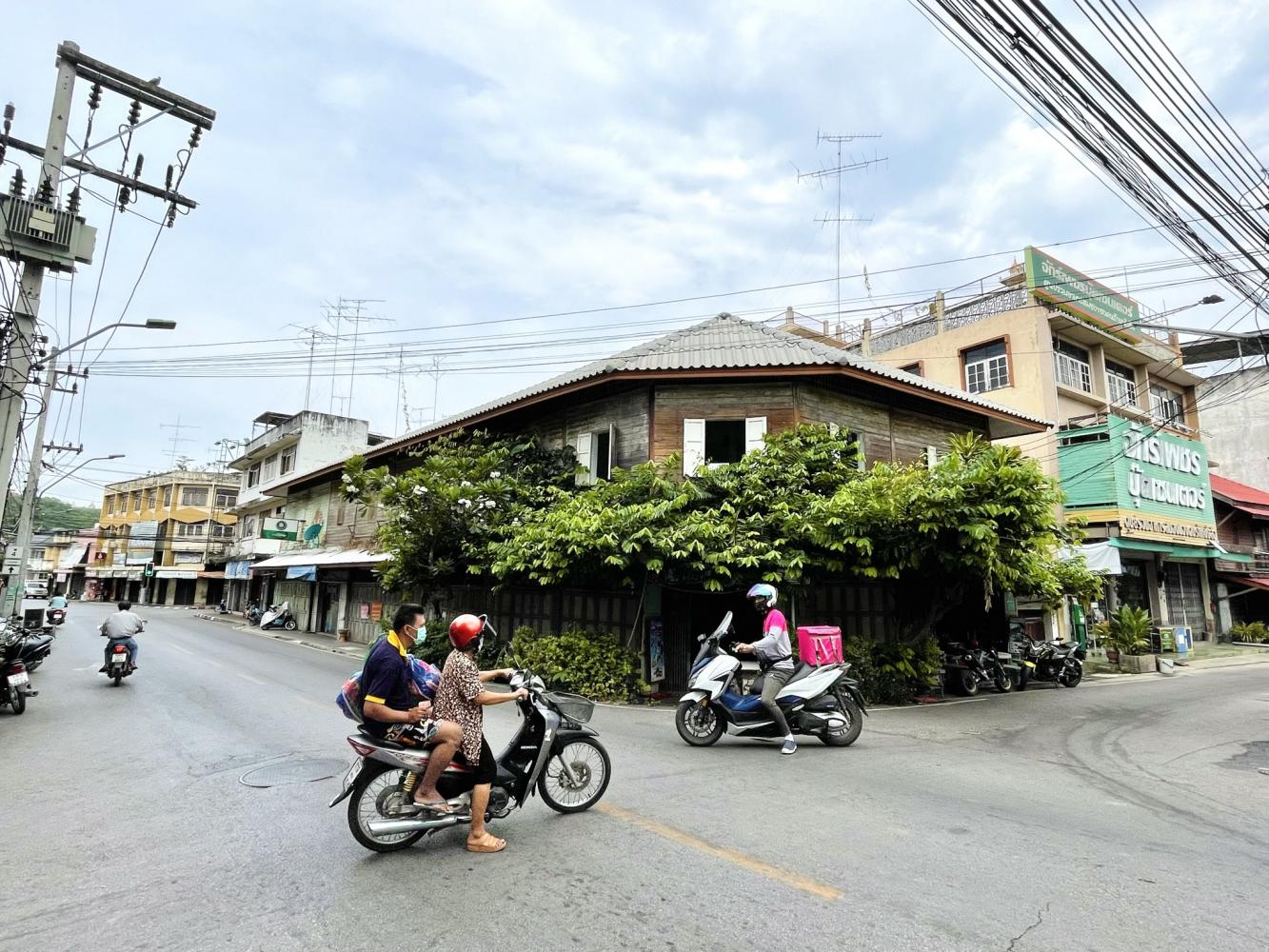 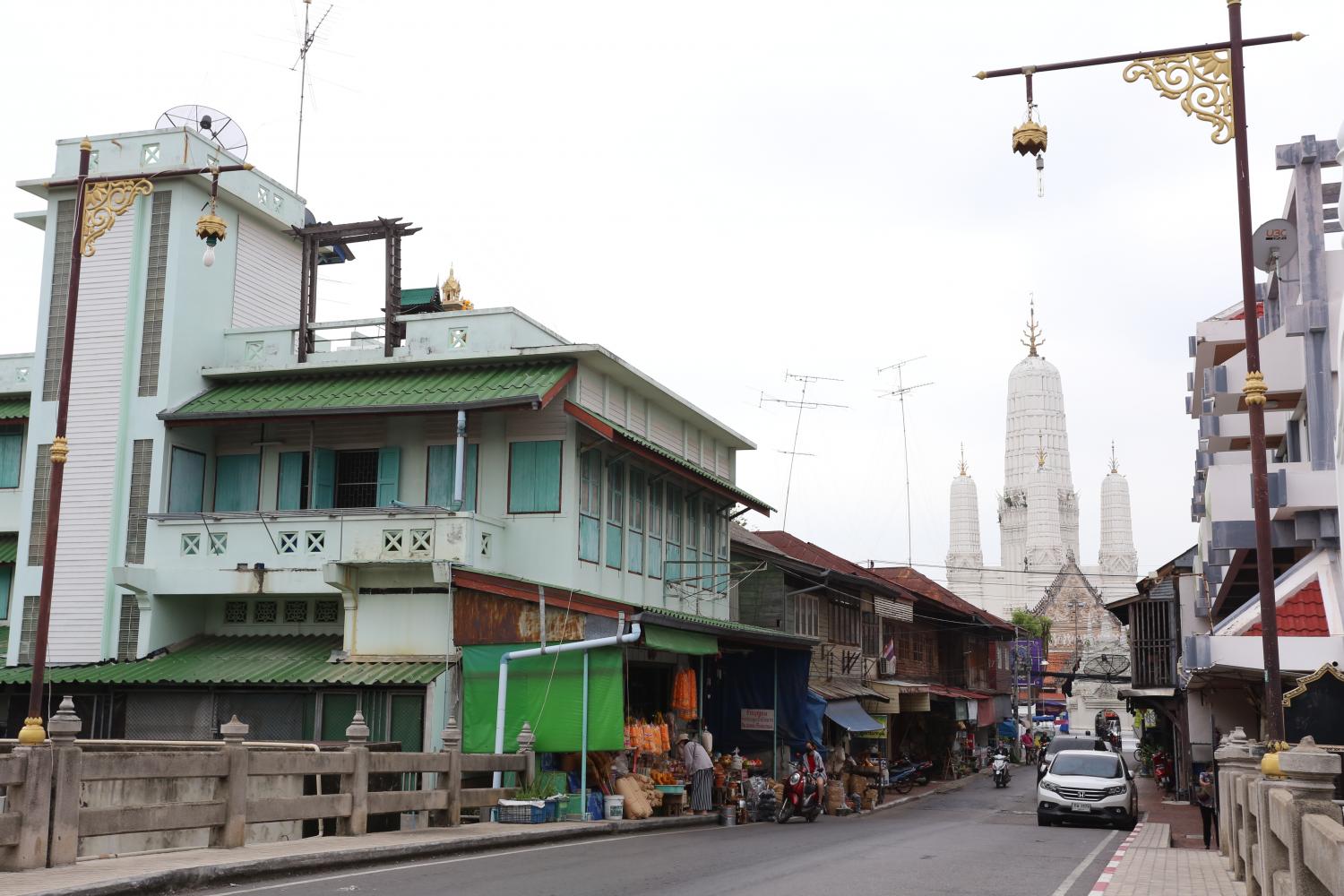 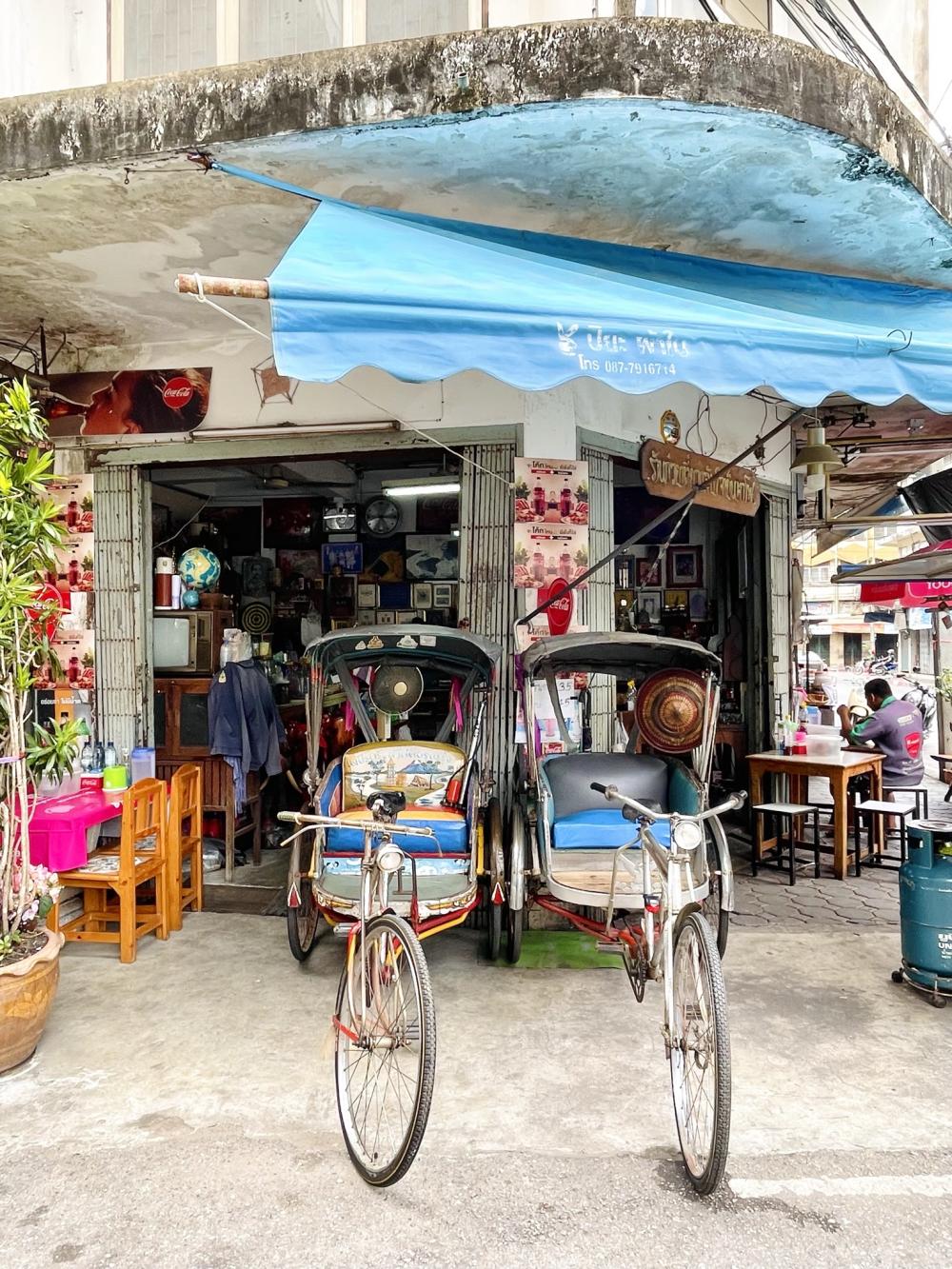 After a devastating conflagration in 1915, many two-storey classic shophouses sprouted along the narrow alleys and the old road was widened, bringing the neighbourhood up to date. However, like the ups and downs of life, the market lost prominence with the construction of Phetkasem Road in 1950, but the railway returned it to its past glory days as vehicles became unaffordable to the general populace.

The walls of shophouses serve as a wide canvas and street art illustrates everything in daily life such as lovely kittens gathering on a ladder, musicians playing guitar and piano to lull aquatic animals, and a group of boys plunging into the river.

Other must-try dishes are Phetchaburi-style pork noodles in red broth served with chilli sauce and Cheng Yi Seng bakery's khanom pia (Chinese pastry filled with mashed taro, gourd and salted egg yolk). Colourful murals of dragon and lion dances led us to the end of the alley and Chom Klao Bridge transported us to the Khlong Krachaeng community.

While wandering and looking around, tourists can visualise the classic scene of houseboats anchored along the riverside. During the reign of King Rama V, this first cement bridge in the town was constructed in European style to connect Chi Sa In and Phong Suriya roads and it was broad and sturdy enough to accommodate a herd of elephants and horse carriages.

Turn left and keep walking a few metres to visit Chao Pho Hanuman Shrine, which sits in the middle of the alley to guard this neighbourhood. According to folklore, Dang Unipan gave over her property to create a small shrine before it was extended. Inside, it is home to an old wood-carved statue of Hanuman performing khon to celebrate top-class Phetchaburi craftsmanship. 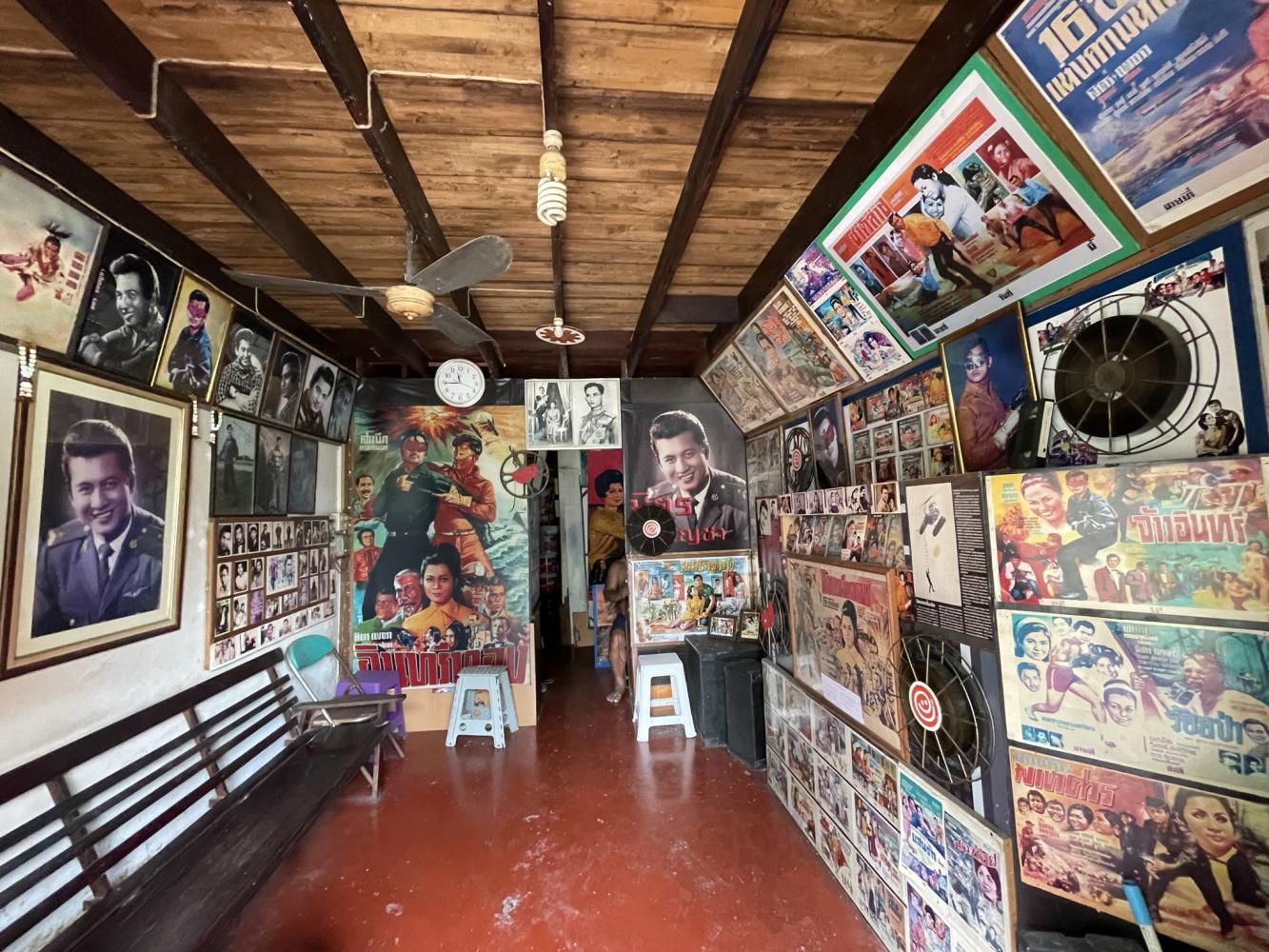 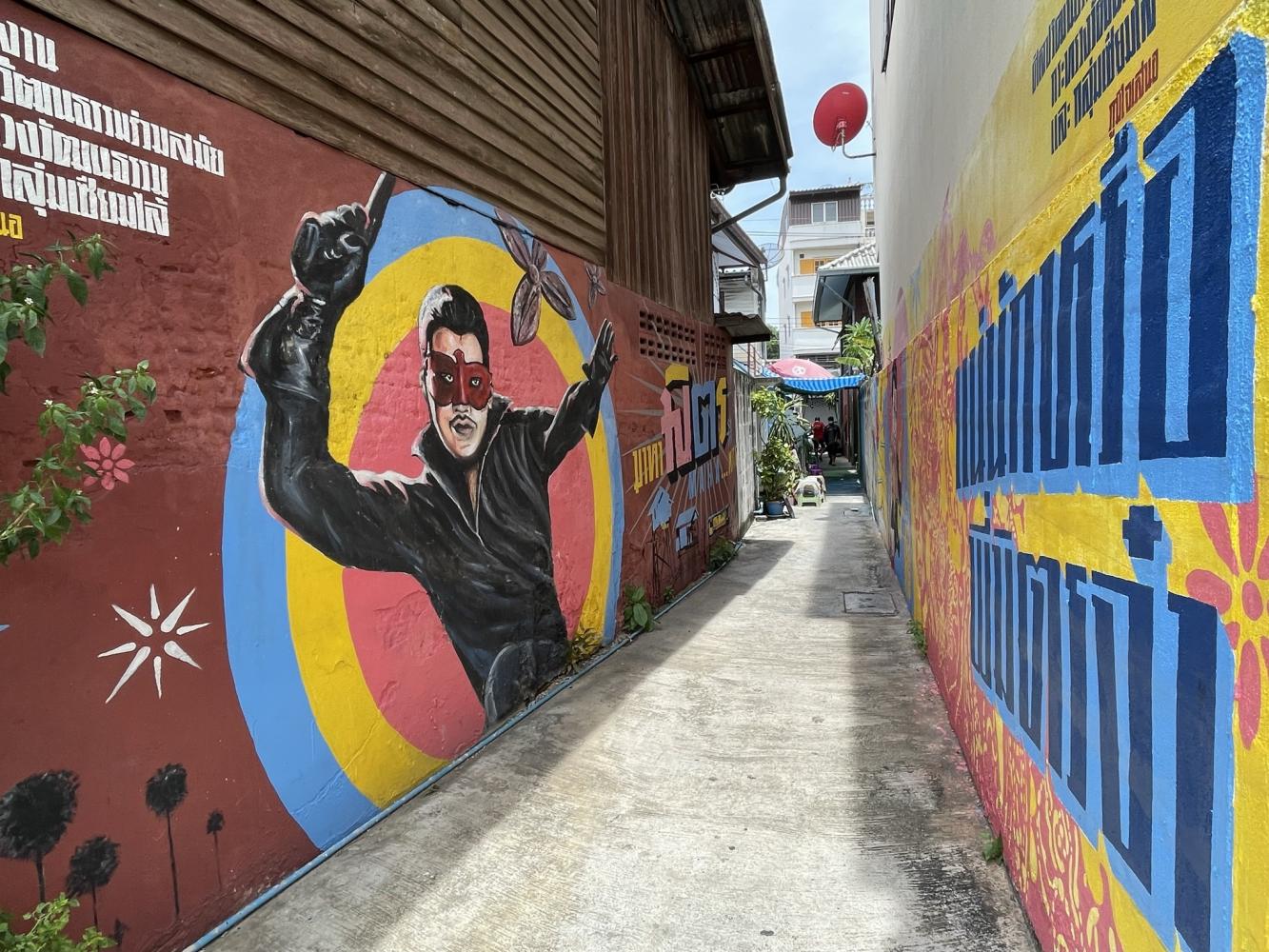 Then we reached the Museum of Shadow Puppets, where we learned about Thailand's rich cultural heritage through an exhibition of 40 astonishing leather shadow puppets from Luang Por Rit's private collection. Situated in Wat Plabplachai, it dates back to the reign of King Rama V when abbot Luang Por Rit established a leather carving workshop in the temple and hired a crew of local craftsmen to produce more than 200 leather shadow puppets based on Ramakien's iconic characters.

The main material was cow leather, with tiger leather utilised to make hermit-inspired puppets. Tossakan and Hanuman puppets are sometimes made from leather from cows that died after being hit by lightning, symbolising magical strength. The majority of the backdrops are made from natural colours derived from local plants.

Thanks to enhanced lighting designs, the museum looks like a mini theatre as each puppet shows a multitude of scenes straight from the epic such as Wirun Champabang and his horse Nilphahu being shot by Phra Ram and Indrajit masquerading as god Indra.

Within a short distance, teacher Kittipong Puengtaeng has turned some space in his house into the Treasure of Phetchaburi River Museum to showcase what he discovered beneath the Phetchaburi River, whose waters have been used in the purification bathing for coronation rites since the reign of King Rama V. 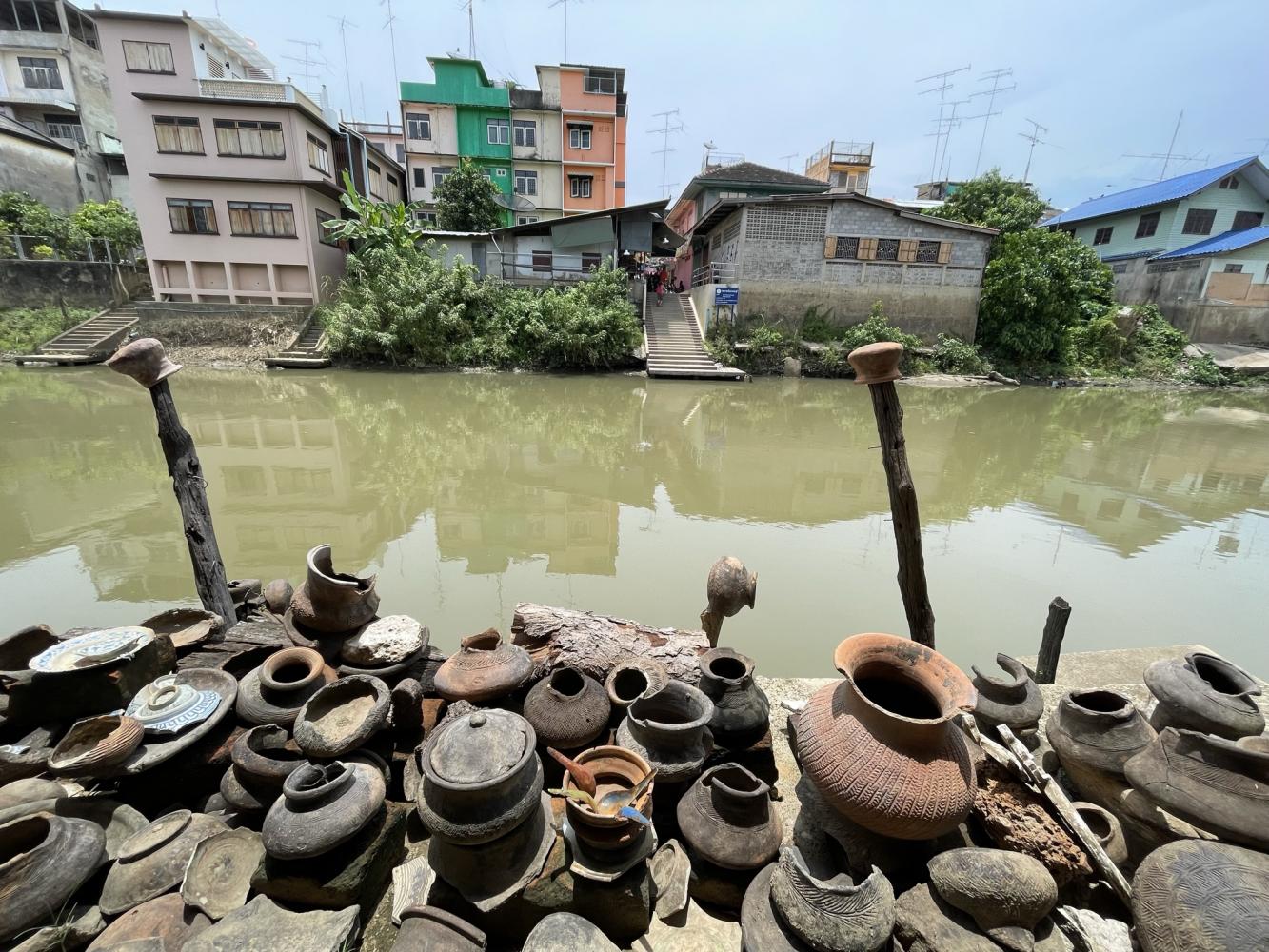 Ancient sugar pots and other artefacts are on display at the Treasure of Phetchaburi River Museum.

In the Ayutthaya period, this river served as a key route for marine trading and transportation since the Amphawa district in Samut Songkhram province and Phetchaburi were significant toddy palm sugar suppliers.

Baan Lat district was famous for high-quality sugar pots with unique lanyard motifs until being replaced with metal buckets, which were more lightweight and easier to transport. On display is a collection of classic Phetchaburi-style sugar pots in different designs, chicken bowls from the Qing Dynasty and other enamelled tableware.

Sanan Phayabphruk, who lives next door, has turned his home into the Mitr Chaibancha museum. He began collecting movie handbills at the age of 15, and his home is adorned with colourful posters and periodicals in honour of famed actor Mitr Chaibancha, who was born in Phetchaburi.

Wat Maha That Worawihan, home of a phra prang from the late Dvaravati and early U Thong eras, is a must-see on any walking tour. Shells were blended with jaggery to make a sticky yet smooth cement as the phra prang was designed to resemble Mouth Meru, where a group of Rahu, garuda and angels guard Buddha's relics. 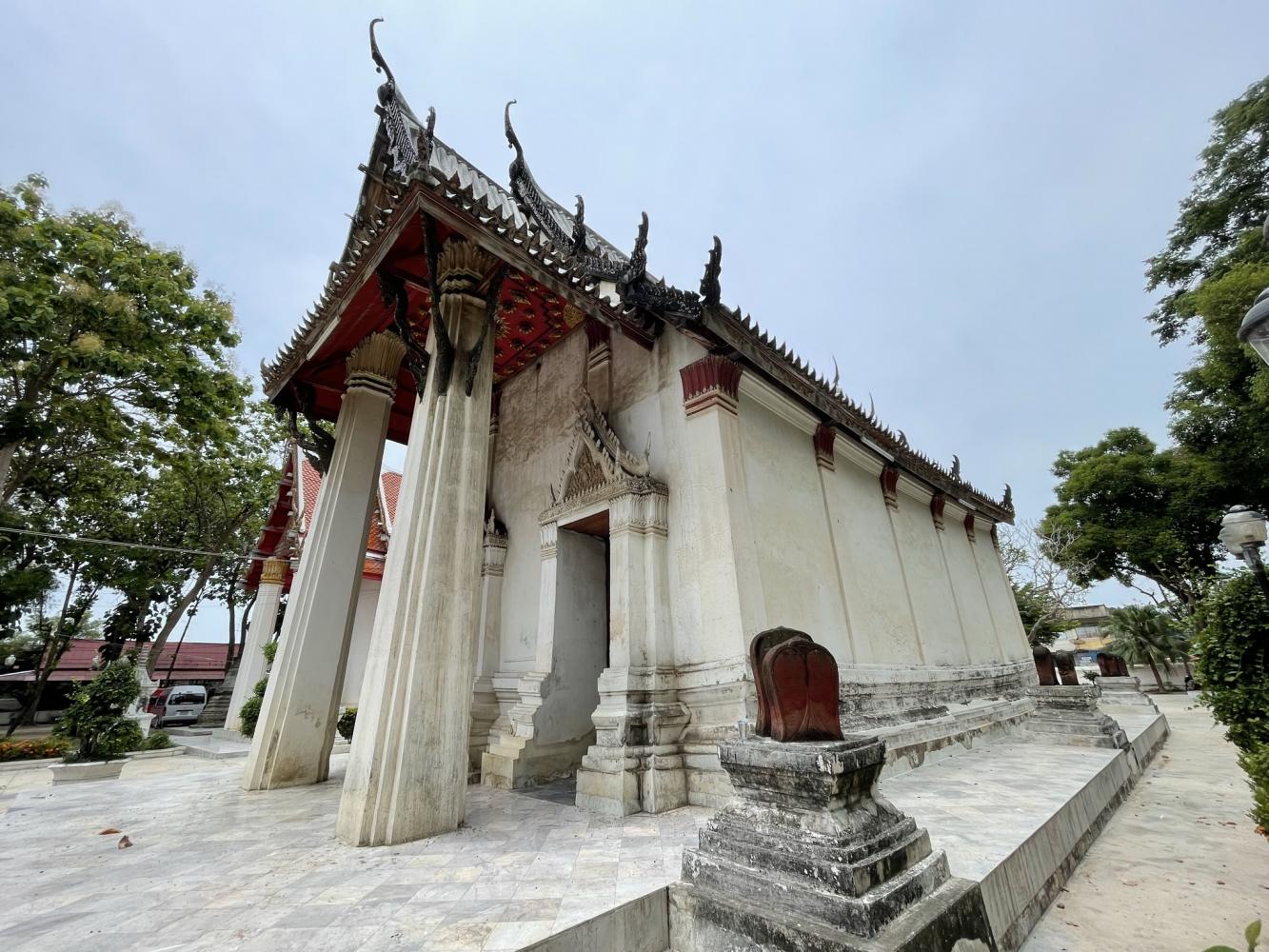 Wat Ko Kaew Suttharam is known for its beautiful murals illustrating Buddha's life that date back to the reign of King Narai the Great. 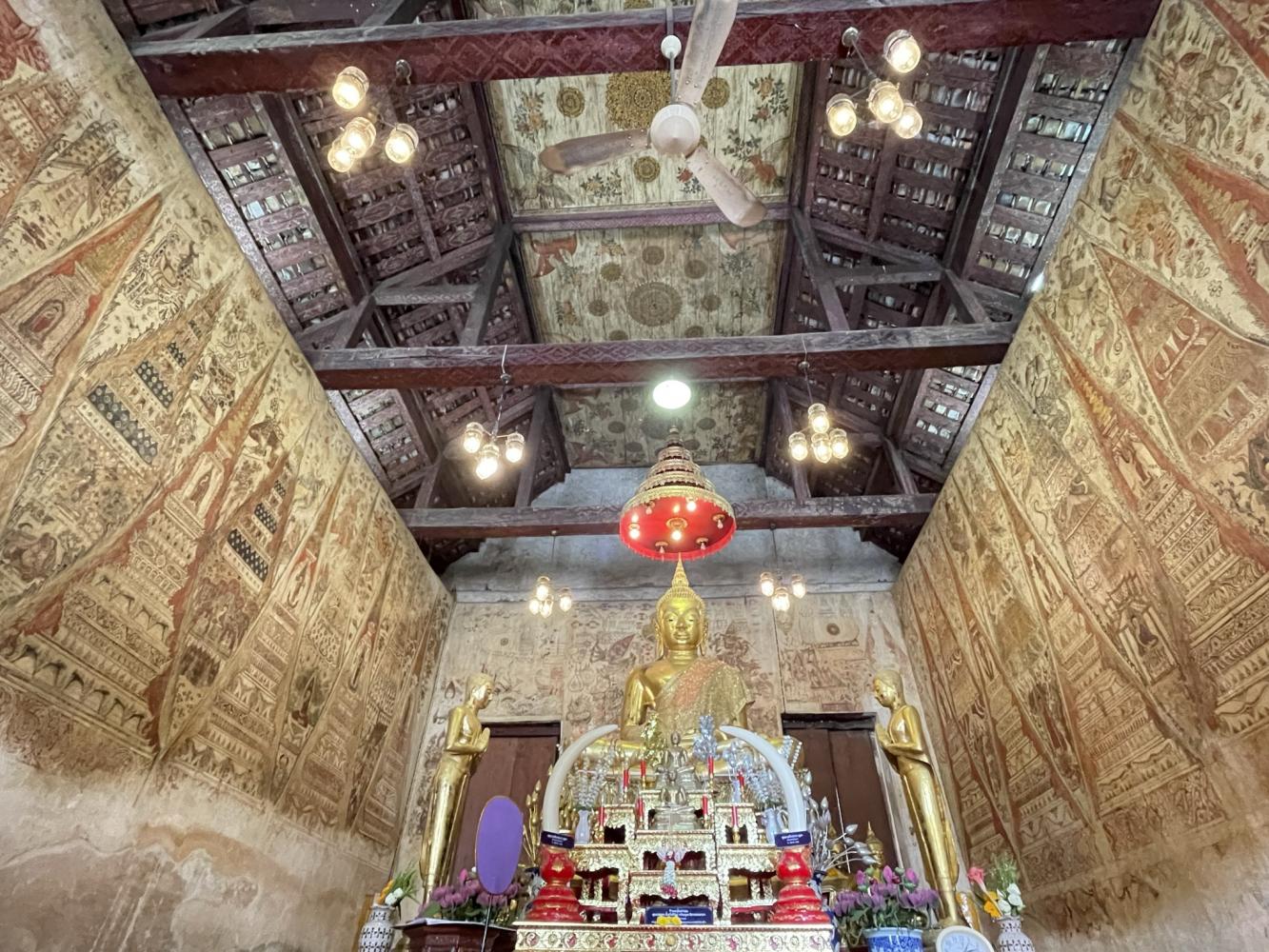 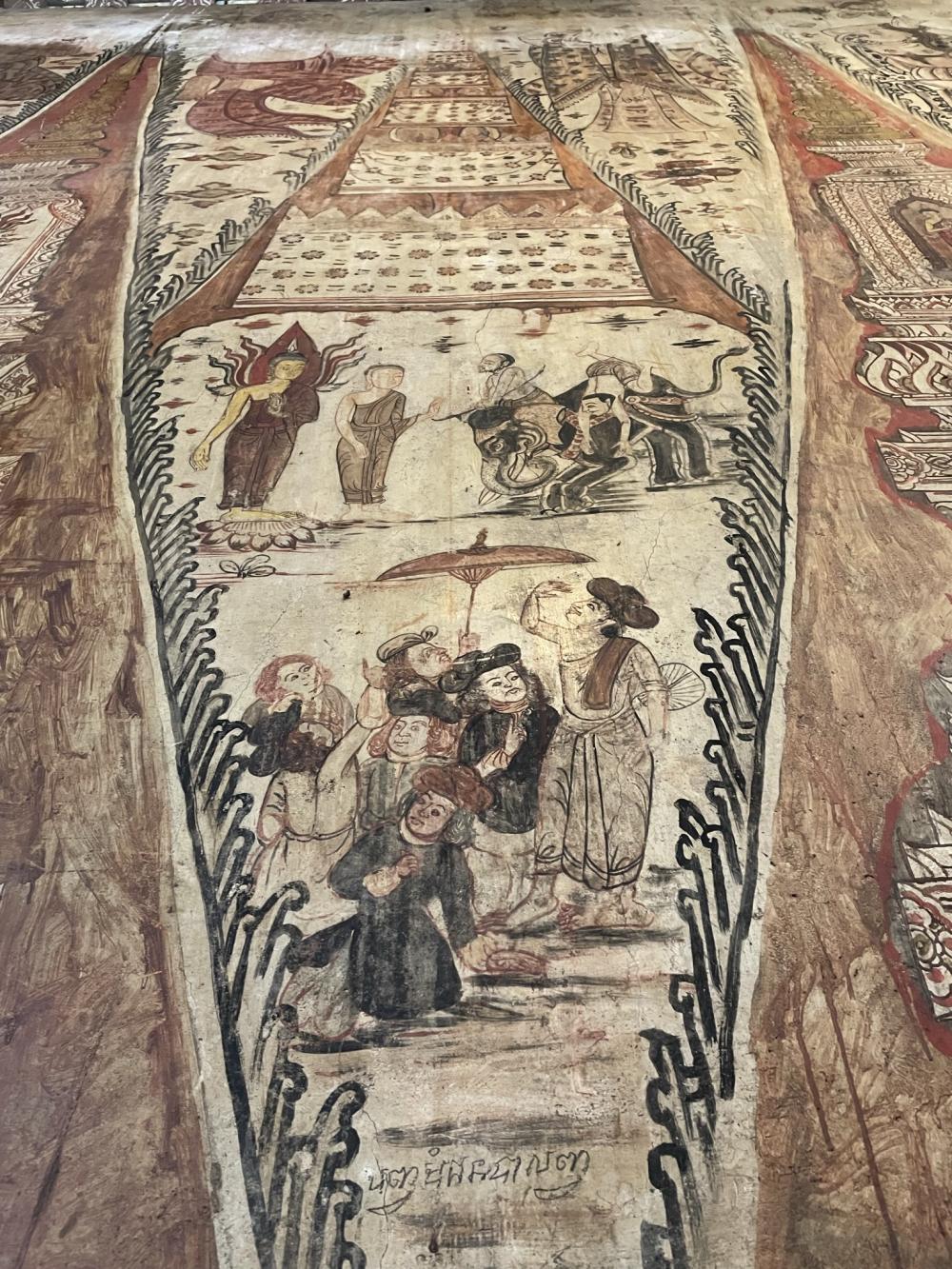 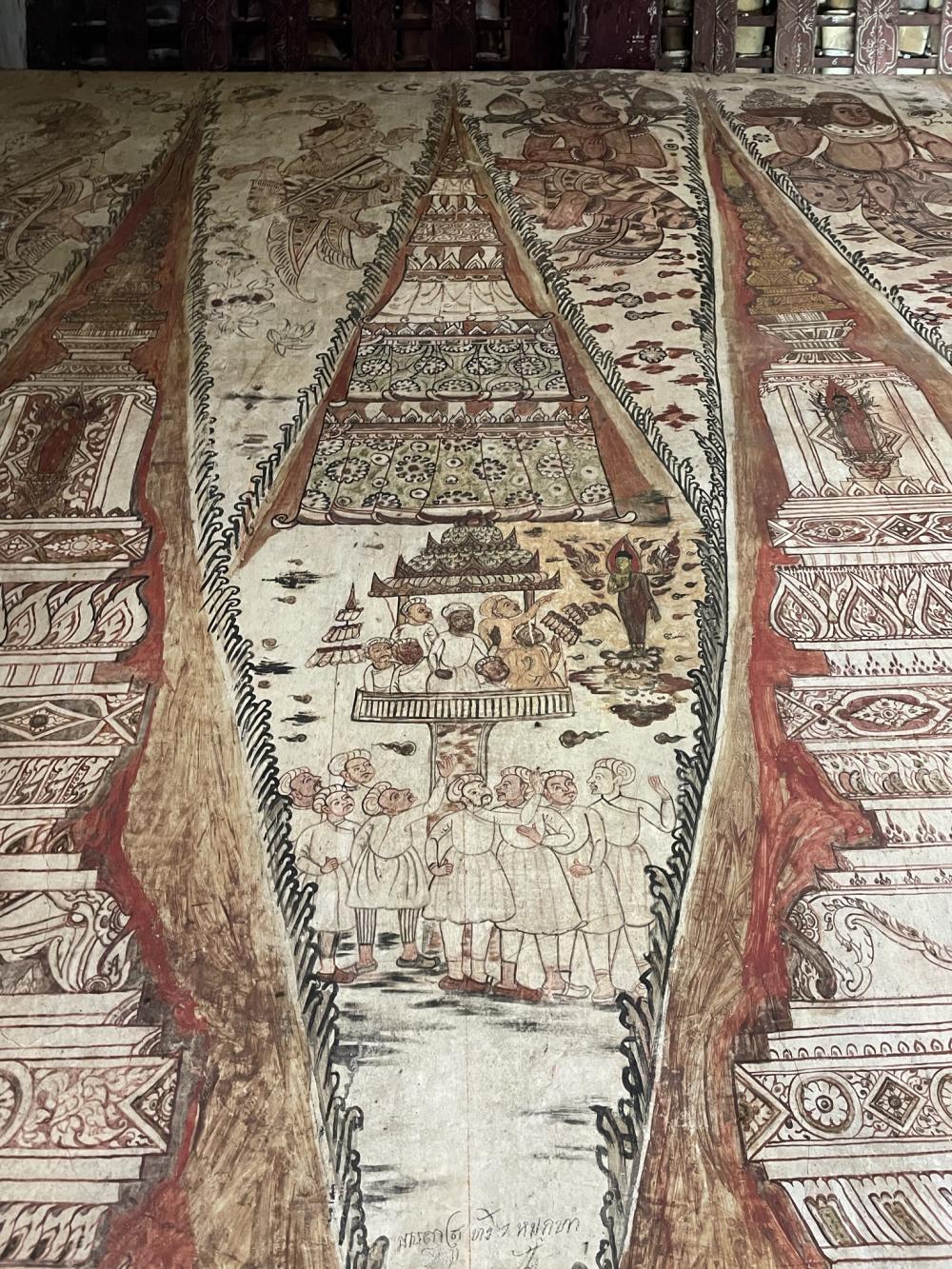 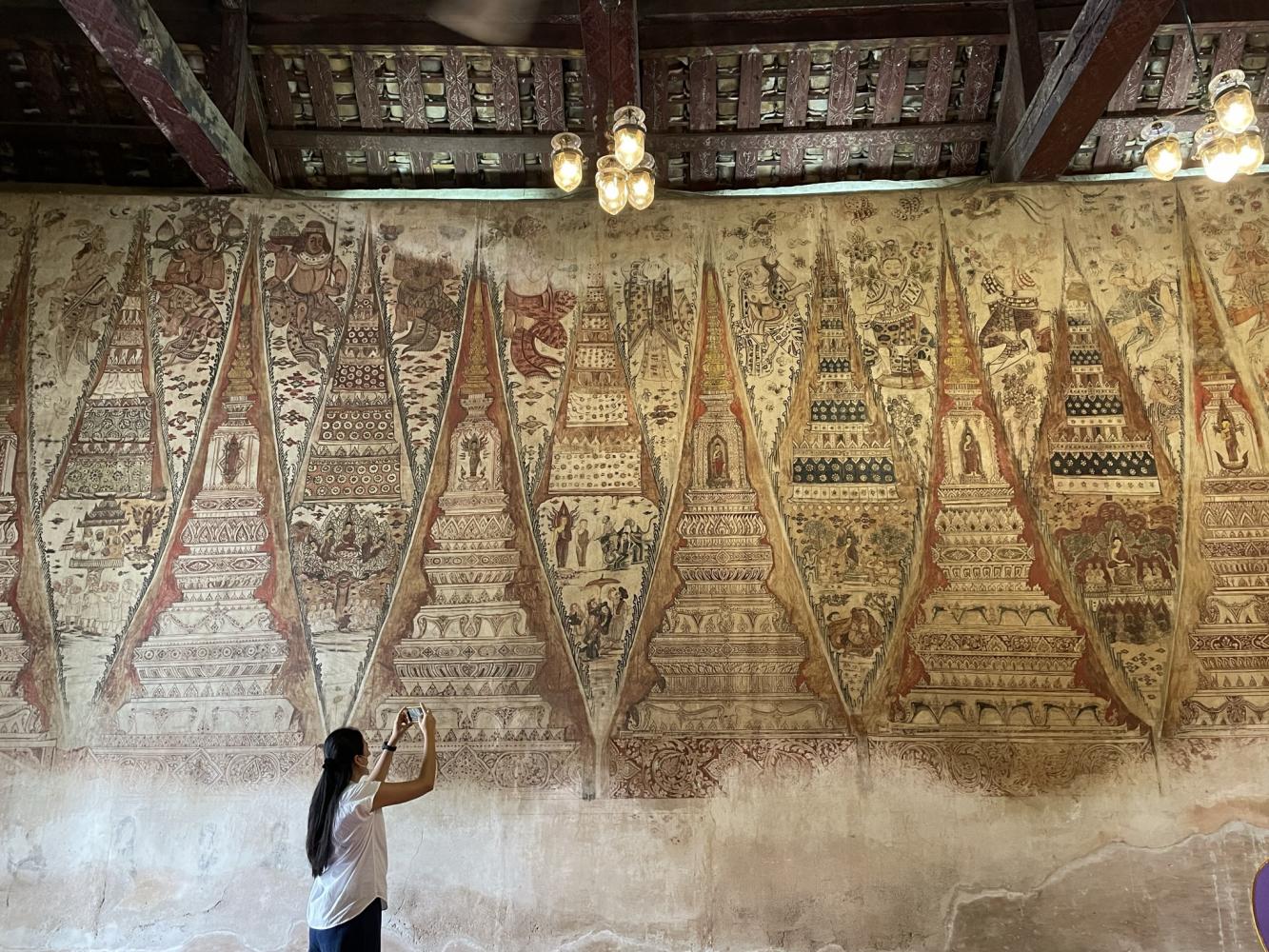 Murals recounting Buddha's life, demons carrying phra prang on their shoulders, and Buddha figures standing in four corners are still there. The foundation is formed of bricks and laterite to strengthen the structures.

The vihara features a large Ayutthaya-style Buddha statue with a crown and a beautiful imperial warrior. He has a serious face, an Indian-style nose, thorny hair and a flame-like halo. The temple has been renovated multiple times, and the walls are currently decorated with paintings showing Buddha's life, Himmaphan creatures, and people's lives during Rama III's reign when maritime trade flourished.

Leaving the waterside community, we headed to Wat Ko Kaew Suttharam in the Ban Lat district. It was erected in the Ayutthaya period to enshrine a traditional Ayutthaya-style Buddha statue. Based on three colours of red, white and green, beautiful murals on the walls illustrate three worlds, Khao Sattaboriphan (the Seven Mountains) surrounding Mount Meru, Himmaphan animals, and 16 pagodas symbolising the Buddha's life.

It also reflects the classic lifestyle during the reign of King Narai the Great as well as traditional Thai amusements. You can see Buddha giving sermons to his mother and Persian and Chinese millionaires, courtiers wearing tall crown hats and a performance of dancing on a wire for the royal cremation ceremony. 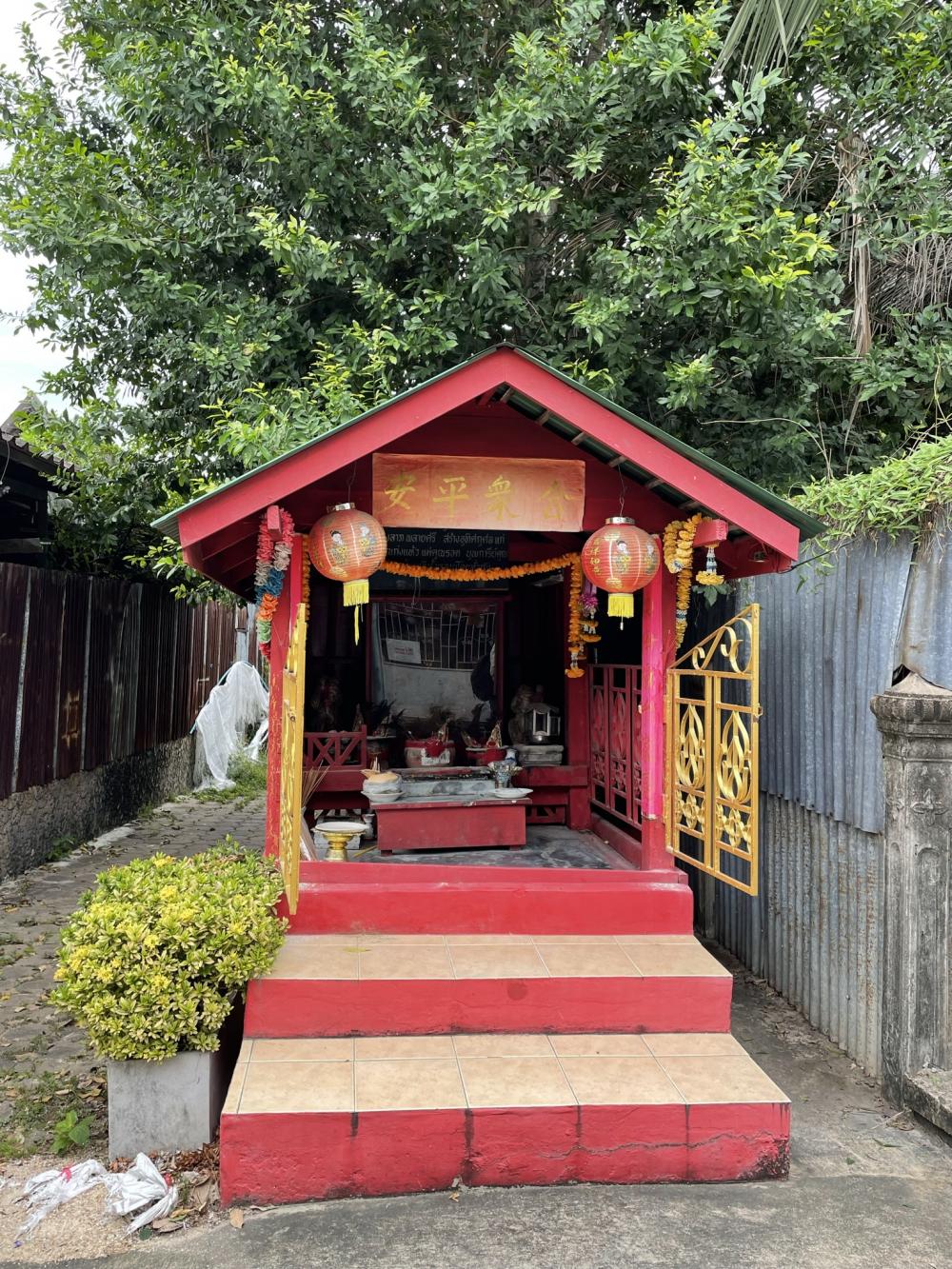 Tucked away in Tha Yang district, Wat Tha Khoi is another worthwhile stop. On the outside, the sermon hall appears conventional, but on the inside, it features stunning paintings depicting Himmaphan animals, local plants and other auspicious symbols meant to offer good fortune, a tranquil life and happiness to people who come to make merit.

Nang Apsorn, who is playing a Thai-style bamboo fiddle, is being transported to paradise by a nok hastilinga (a hybrid of an elephant and an eagle). A butterfly indicates the life cycle, a pomegranate and custard apple imply having many offspring, and a deity riding a chariot surrounded by high-class creatures represents family unity.

The temple also houses an ancient ubosot from the late Ayutthaya period, with a gable illustrating a pair of hera (a mixture of a naga and crocodile) and an angel surrounded by a bunch of plants and flowers.

Inside, it boasts a gold 500-year-old Ayutthaya-style Buddha statue with a red mouth, a narrow forehead and a prominent nose, while murals on its ceiling portray a moon amid a sea of stars. 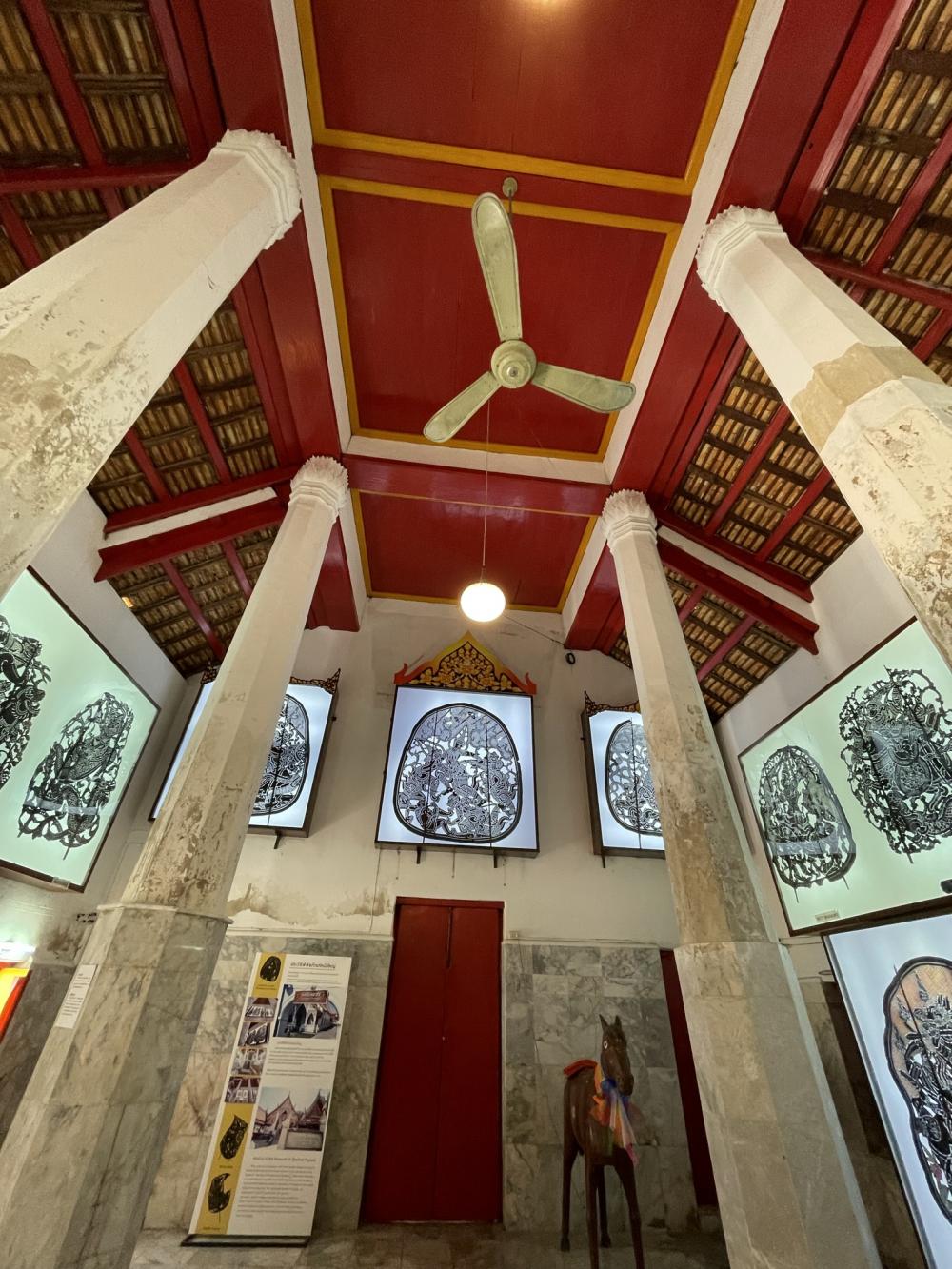 The Museum of Shadow Puppets is hosting an exhibition of Luang Por Rit's personal collection. 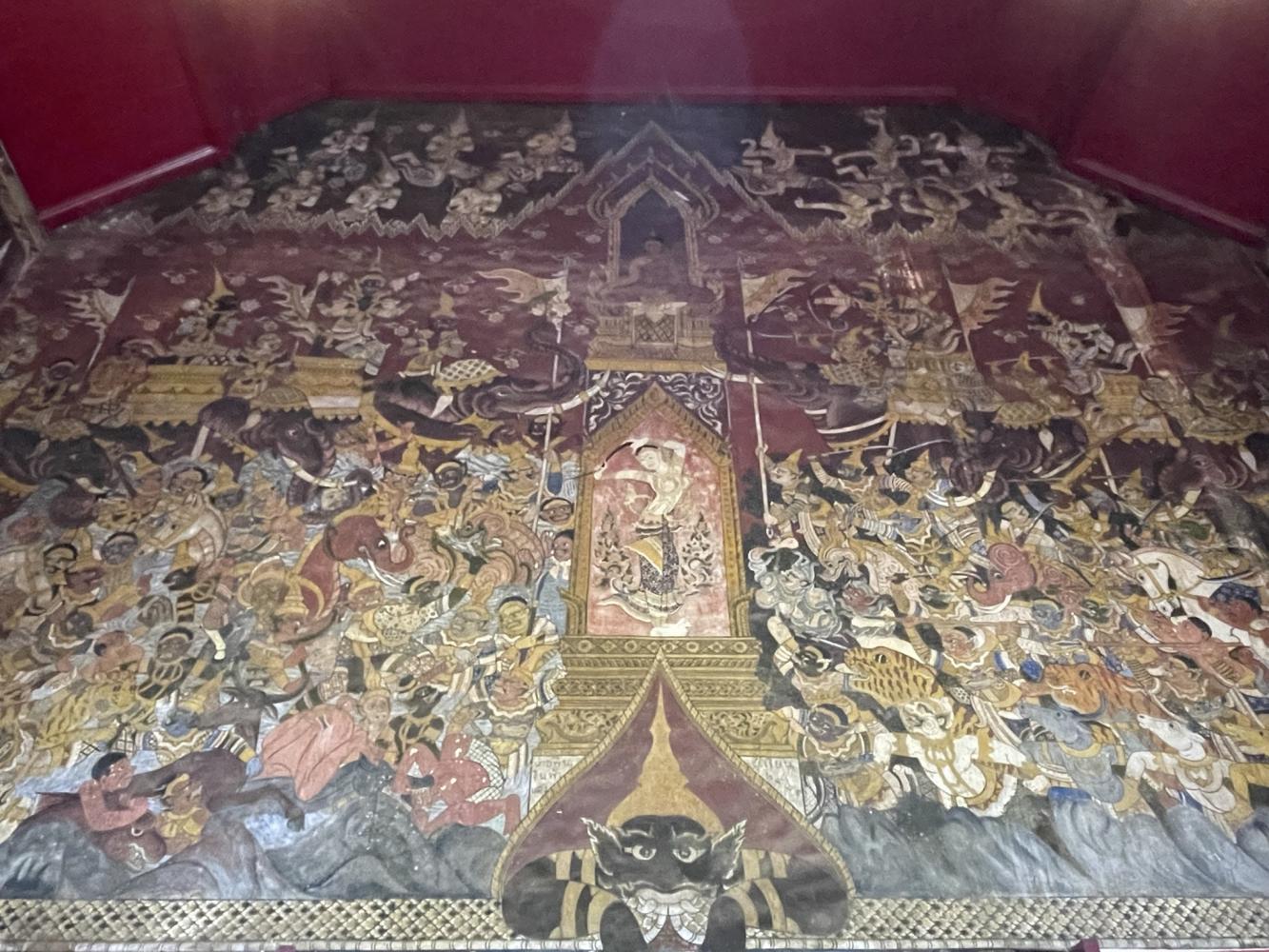 Wat Maha That Worawihan was built to house Buddha's relics between the late Dvaravati and early U Thong periods. 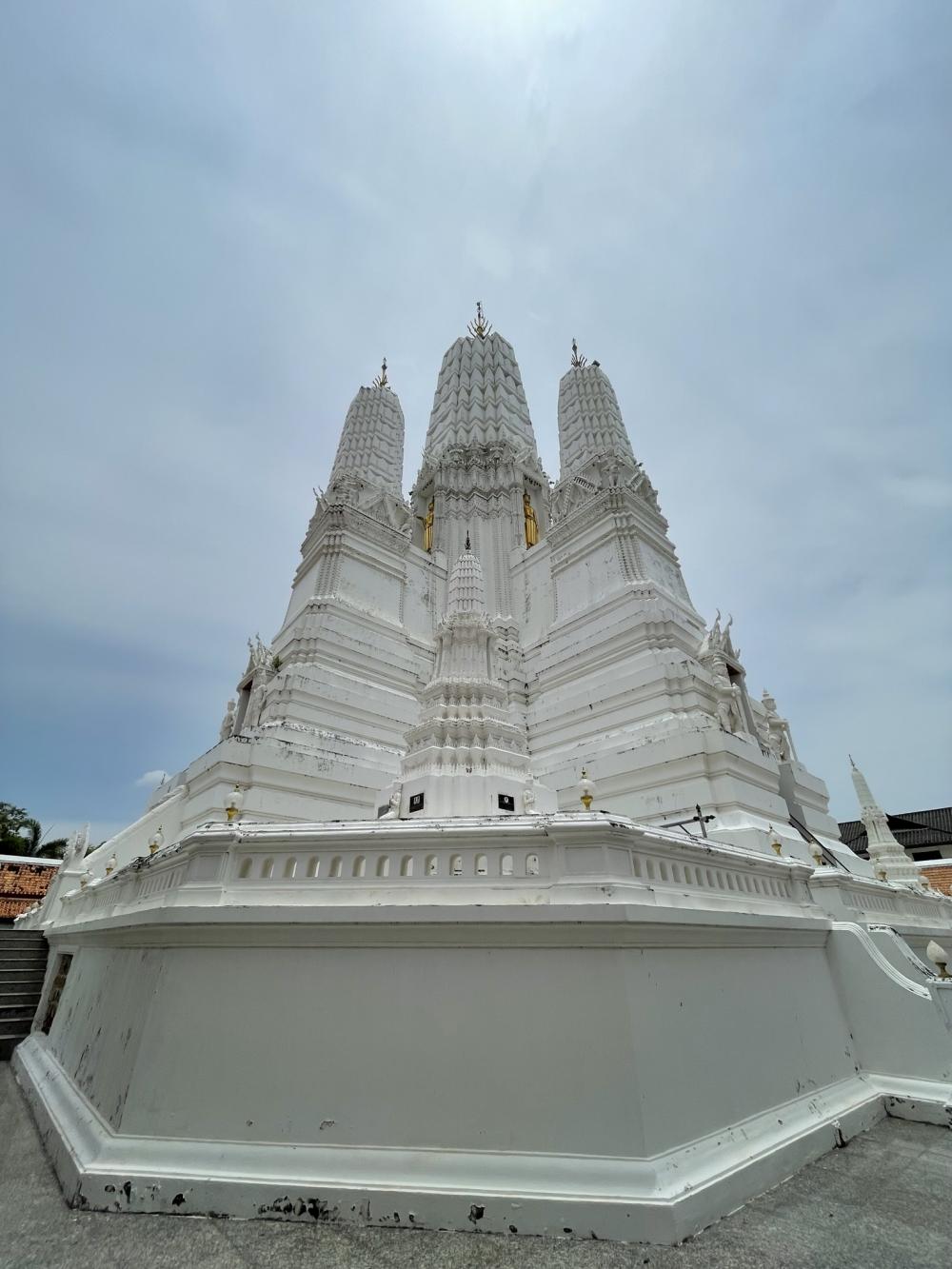 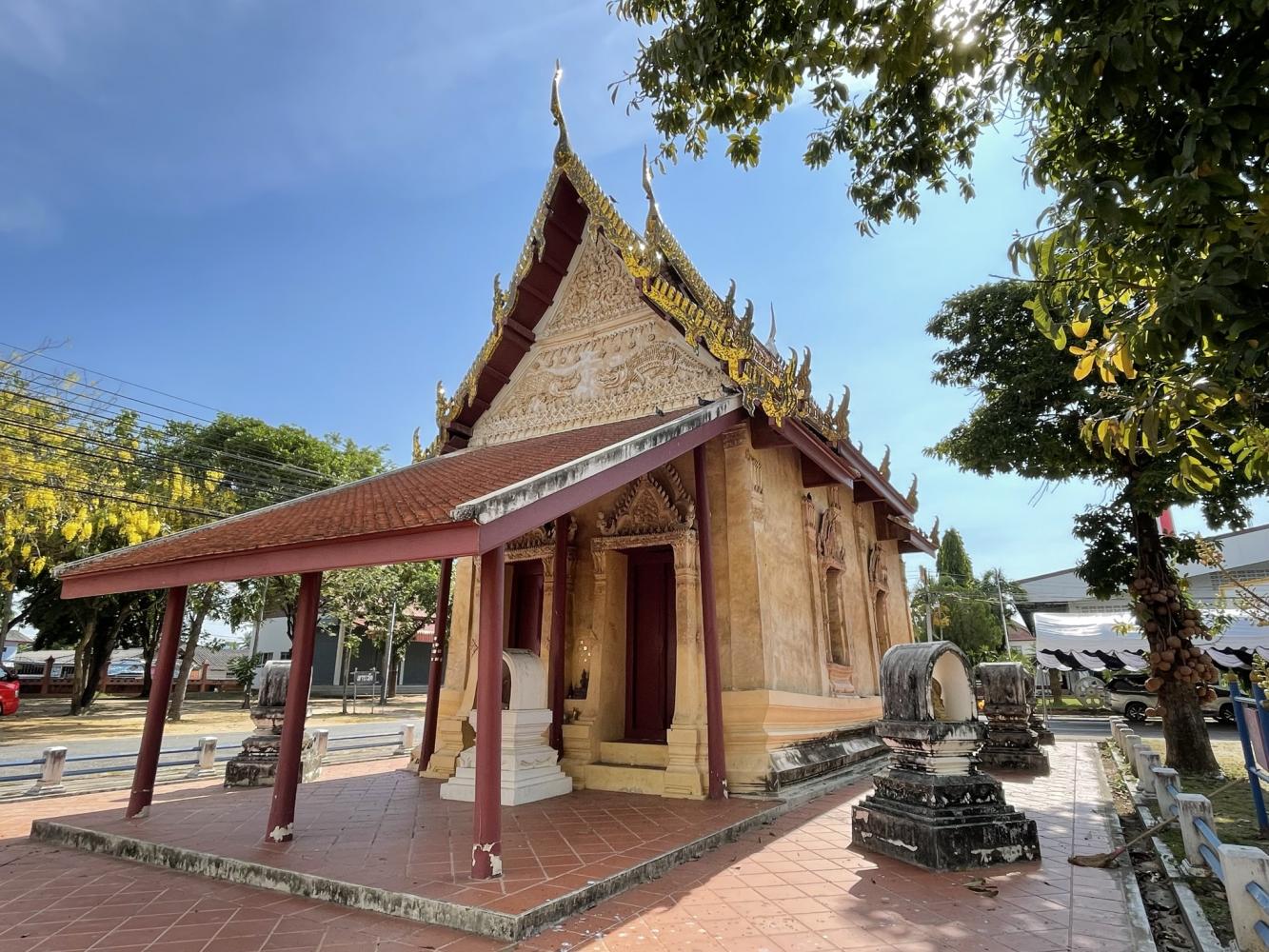 Wat Tha Khoi is home to an ancient ubosot from the late Ayutthaya period. 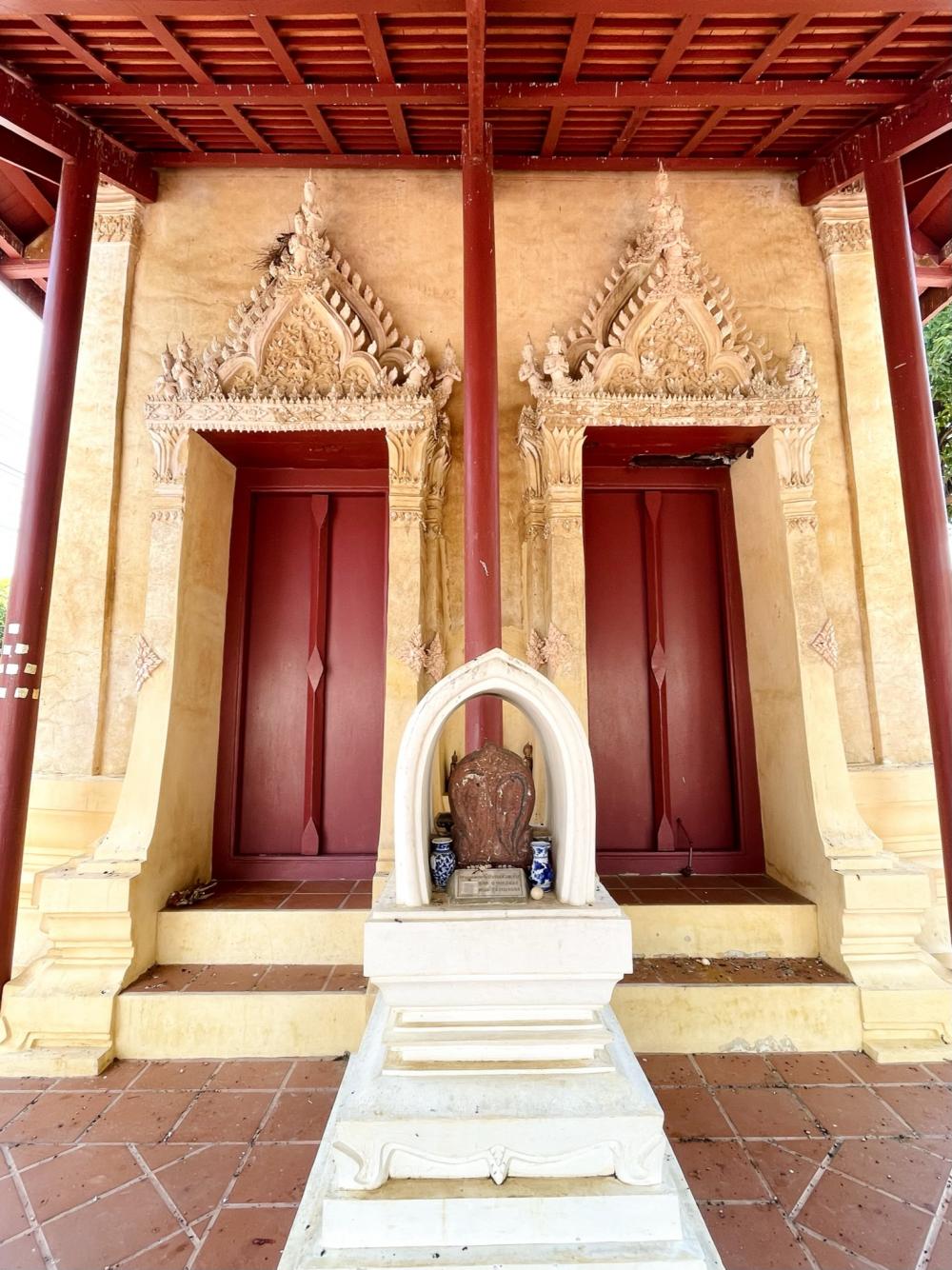 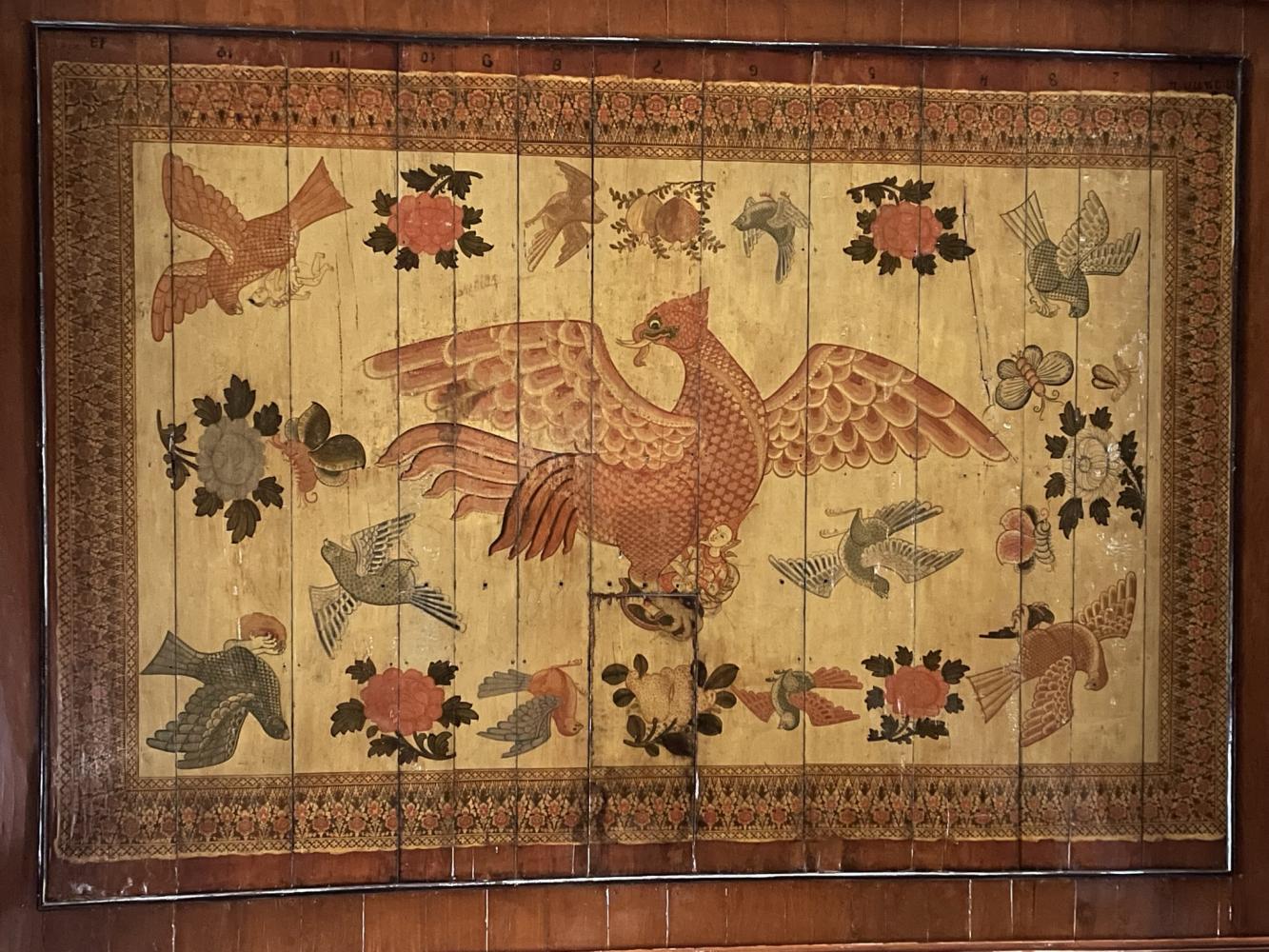 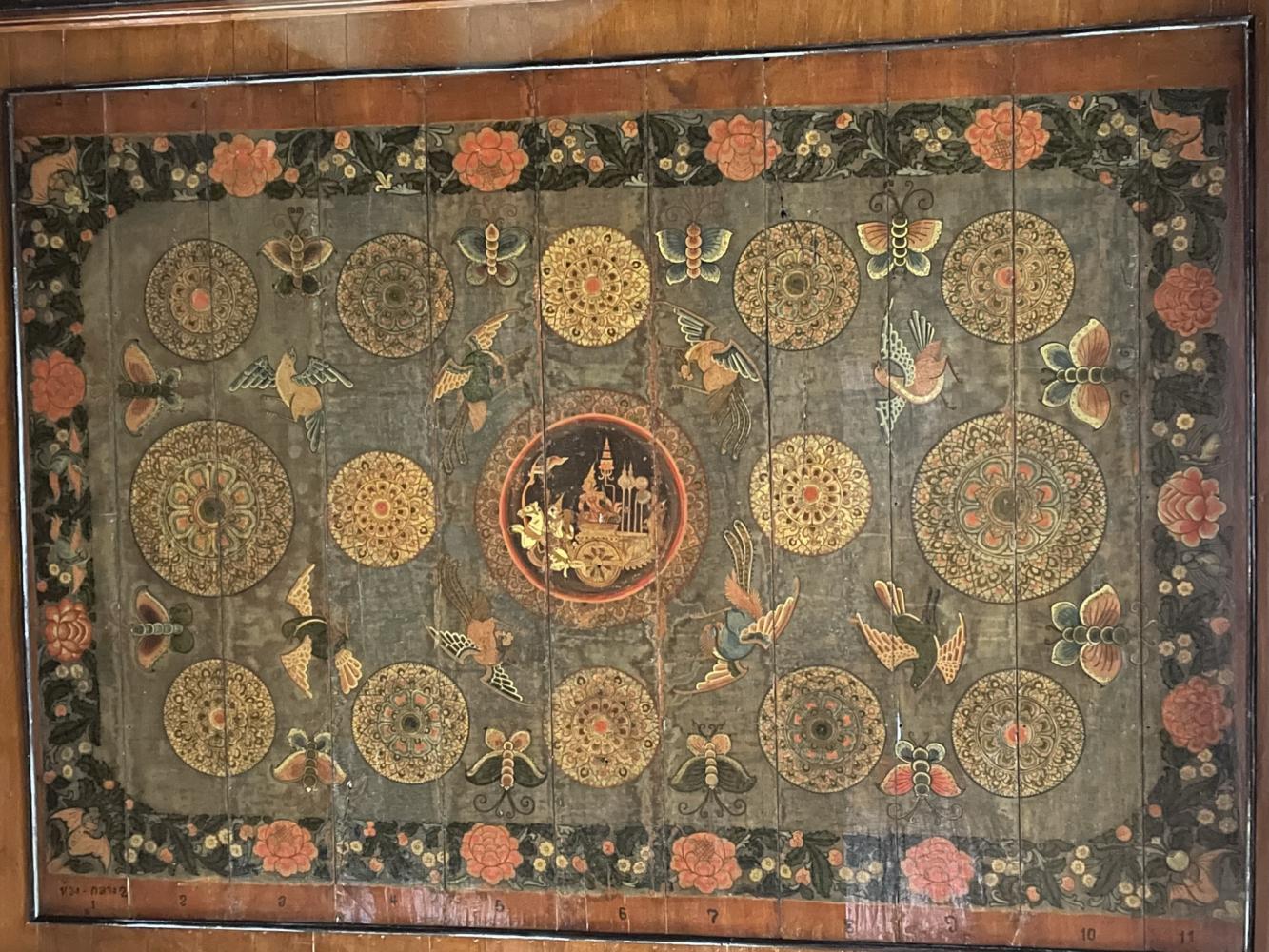 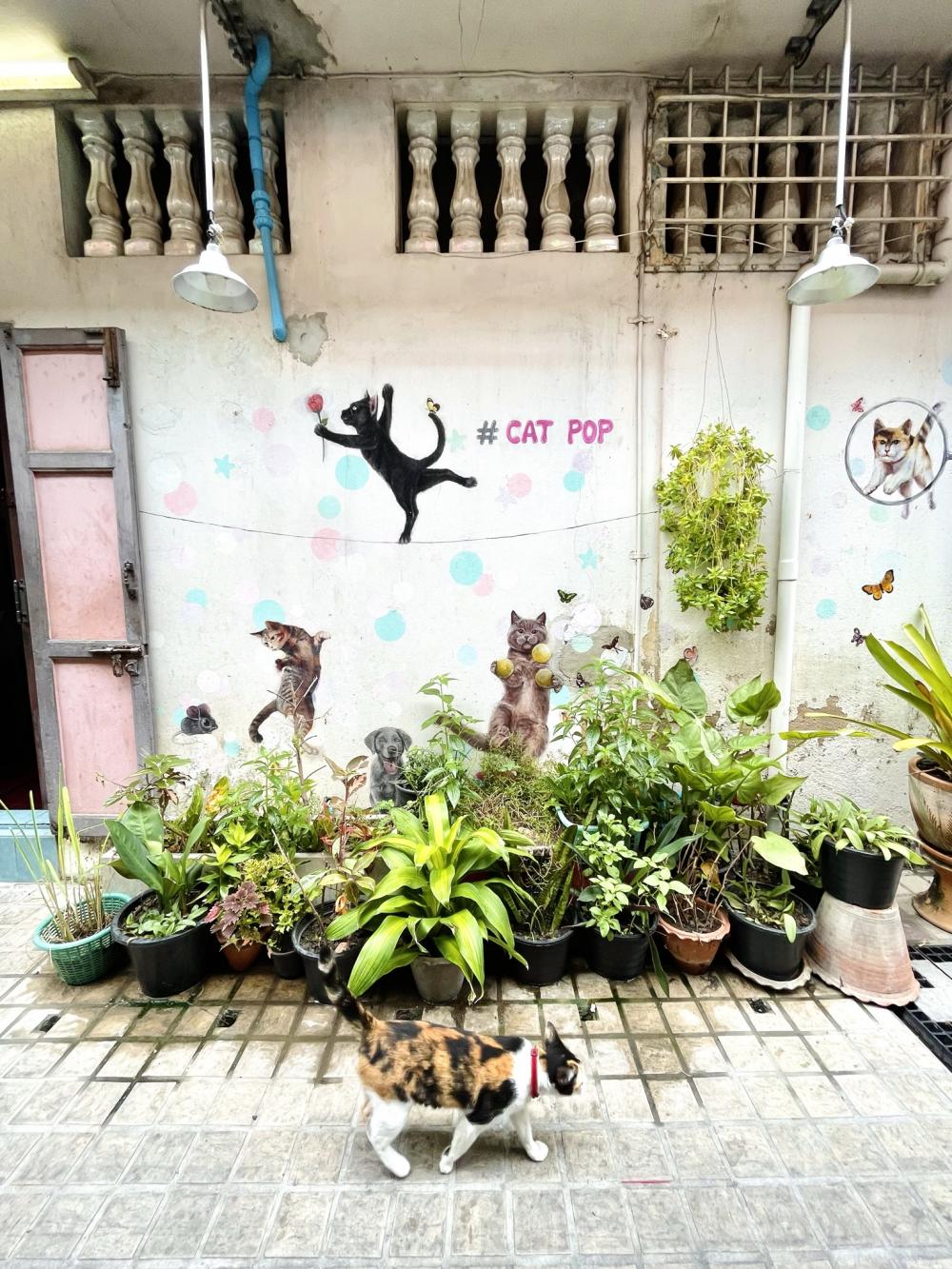 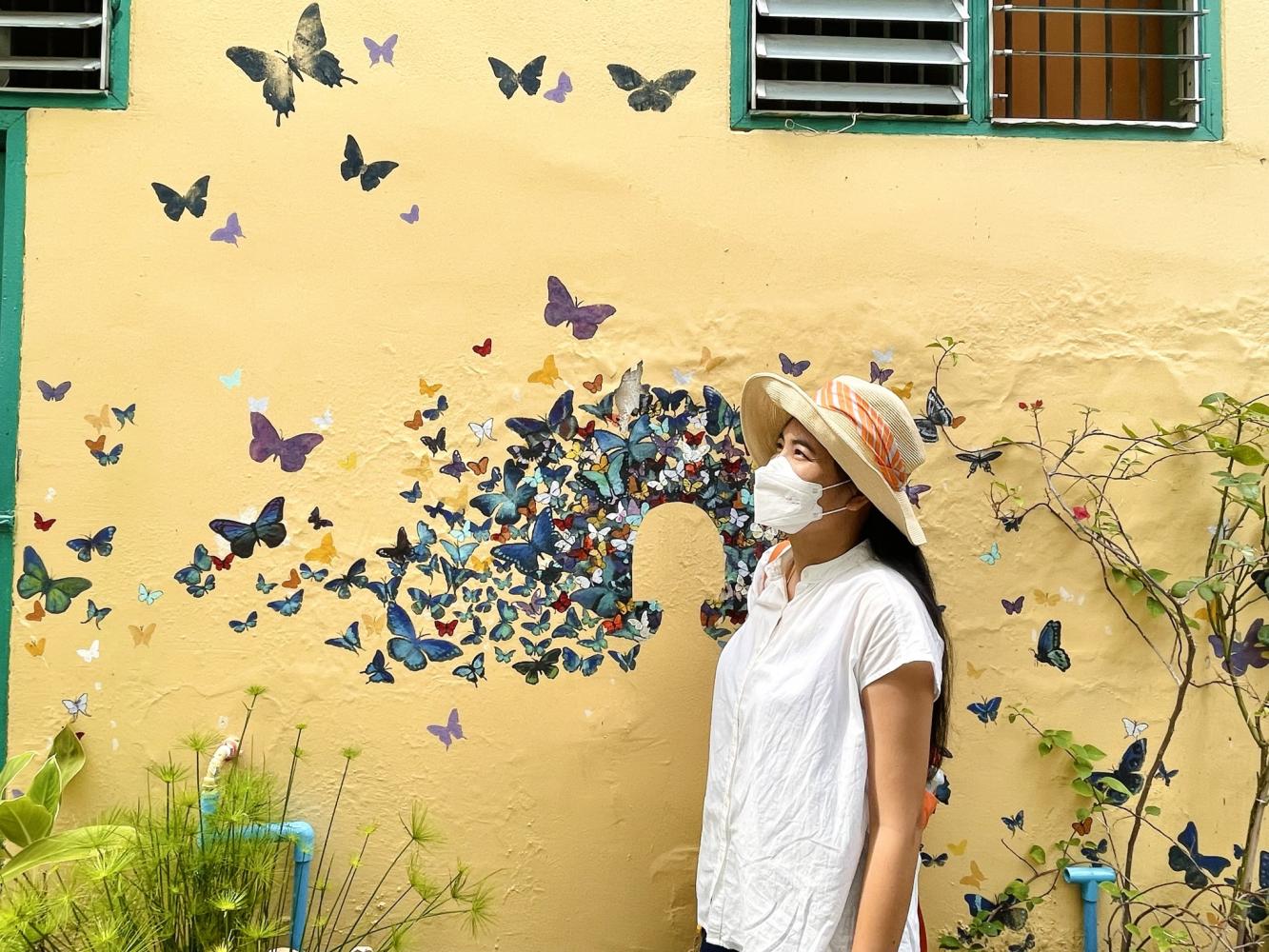 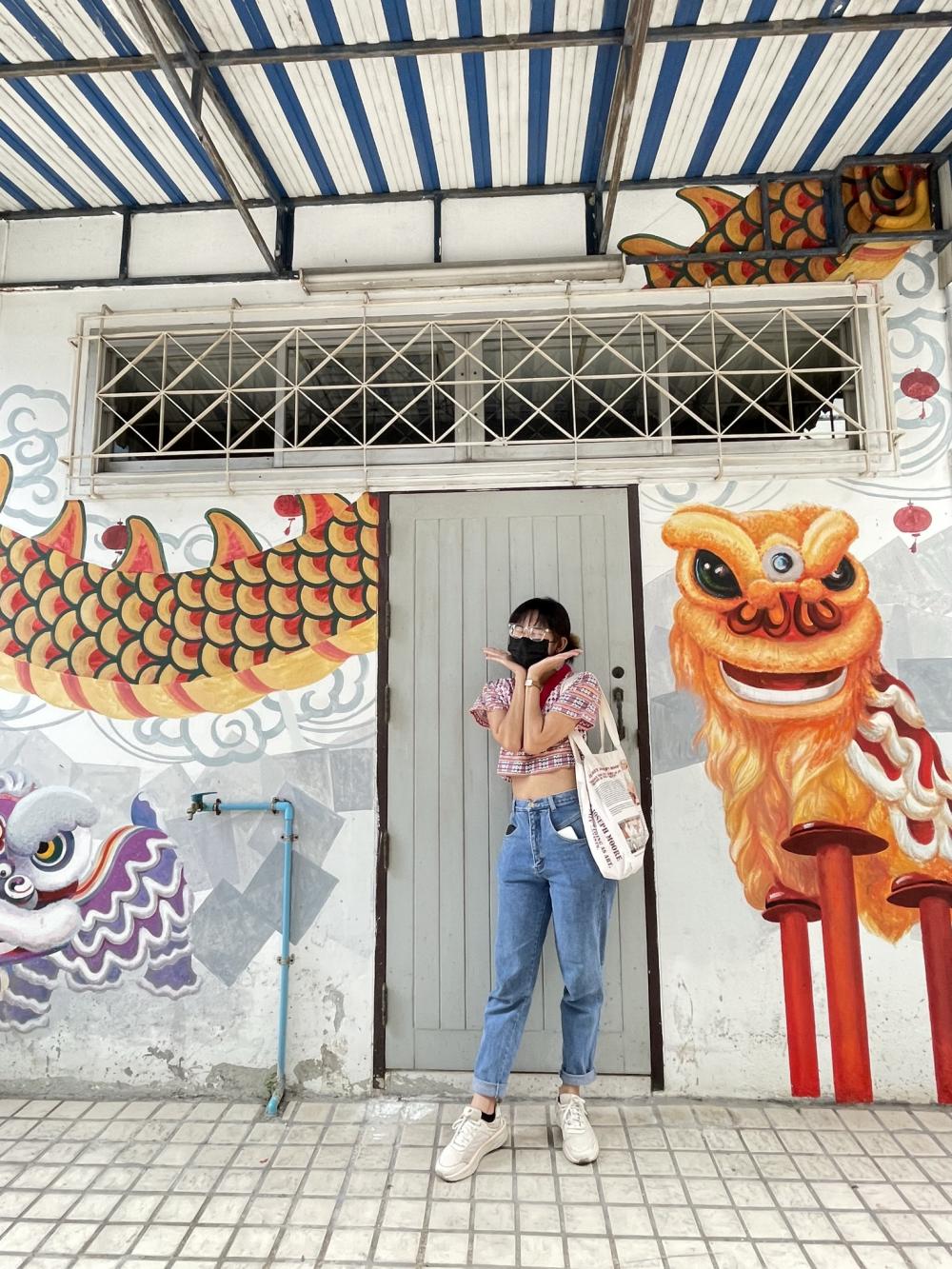 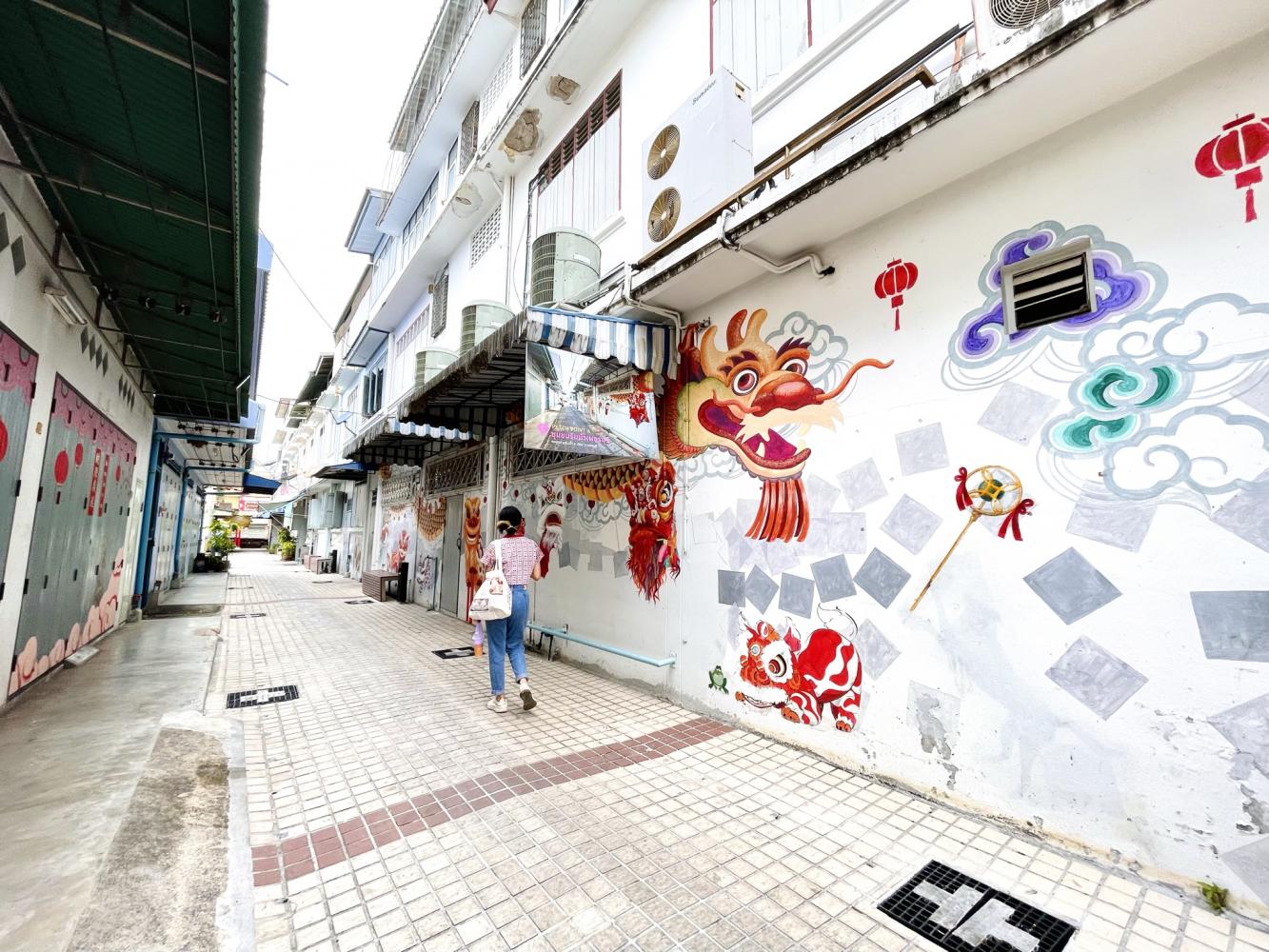 Roaming in the gloaming 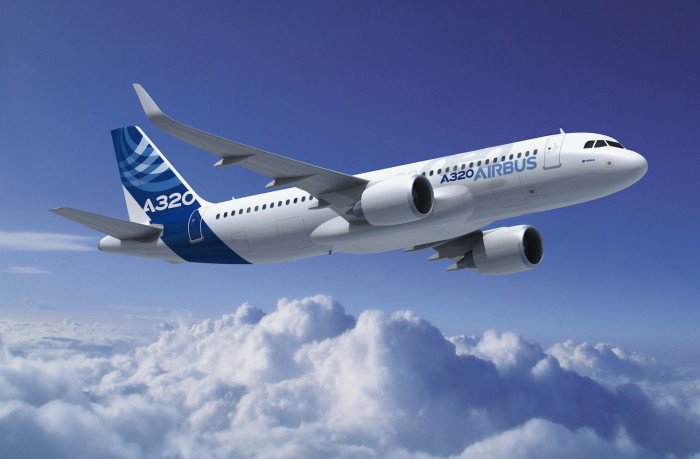 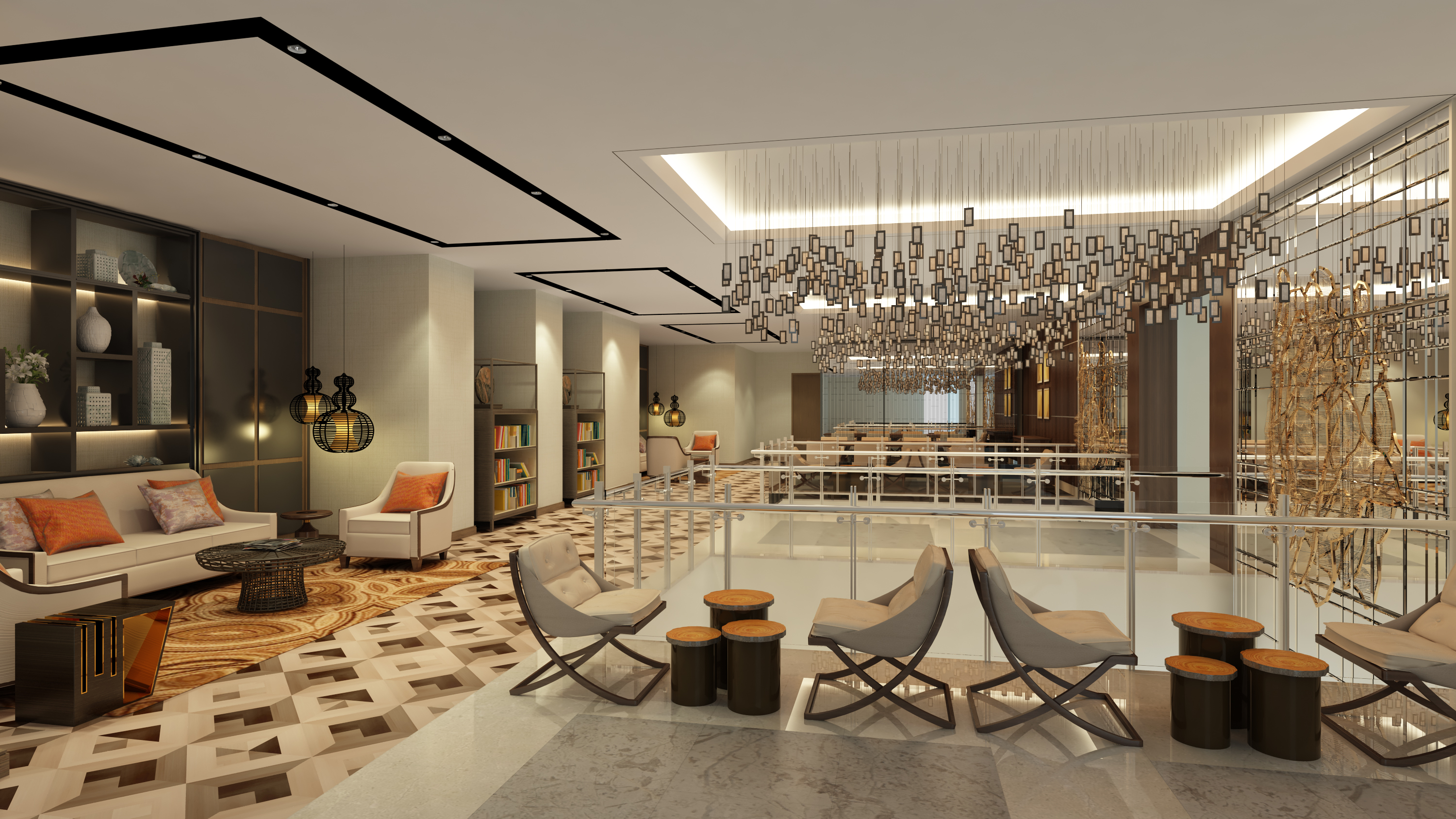 These were the best real estate projects in the Philippines last yearThis article... 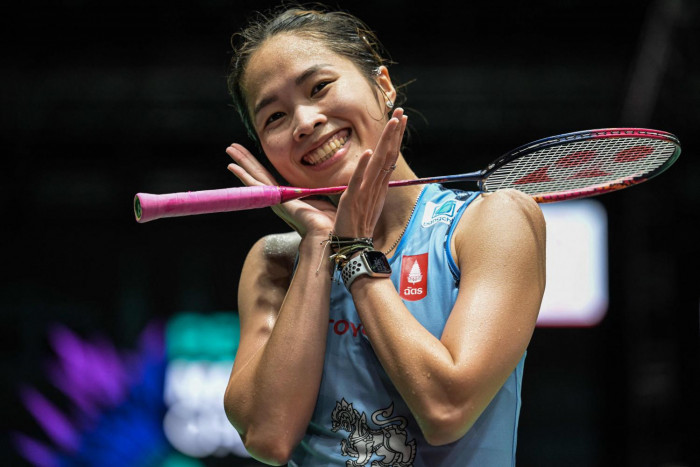