AstraZeneca says it is working closely with Southeast Asia governments to ensure its Covid-19 vaccine is supplied "as quickly as possible", after reported delays in deliveries of orders from a Thai plant owned by His Majesty the King. 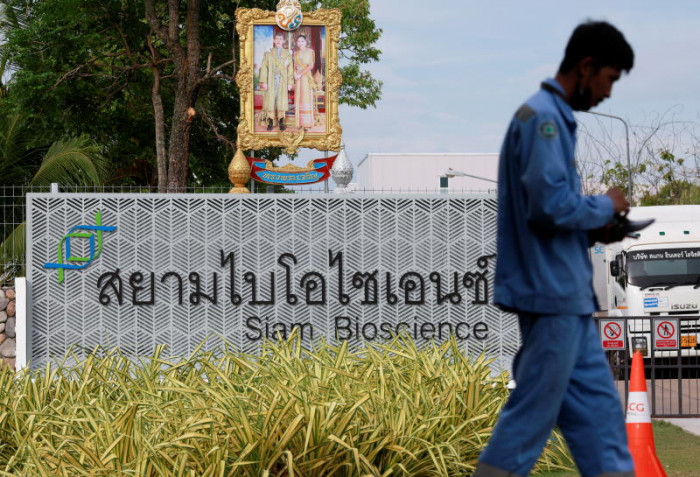 Thailand General AstraZeneca says ‘working’ with SE Asian nations on vaccine deliveries published : 10 Jun 2021 at 14:48 writer: Reuters FILE PHOTO: A man walks in front of the Siam Bioscience factory, where the vaccine against the coronavirus disease (Covid-19) will be produced, in Nonthaburi on June 3, 2021. (Reuters) AstraZeneca says it is working closely with Southeast Asia governments to ensure its Covid-19 vaccine is supplied "as quickly as possible", after reported delays in deliveries of orders from a Thai plant owned by His Majesty the King. Malaysia and Taiwan this week became the latest in the region to warn they expected delays in deliveries of AstraZeneca vaccines manufactured in Thailand. "Distribution to other Southeast Asian countries, including Malaysia, will commence in the coming weeks," the company said in an e-mail to Reuters. "We are working closely with each of the relevant governments to supply our Covid-19 vaccine as quickly as possible," the AstraZeneca statement said. It did not respond further to questions on the Nonthaburi plant's current and anticipated future production levels. AstraZeneca's distribution plans in Southeast Asia depend on 200 million doses made by Siam Bioscience, a company owned by His Majesty that is making vaccines for the first time. Questions about Siam Bioscience meeting production targets are sensitive because insulting the monarchy is a crime punishable by up to 15 years in prison. Siam Bioscience in January said it had an estimated production capacity of 200 million doses per year, an average of 15-20 million doses per month. The Thai company and AstraZeneca have not revealed total production goals nor commented on whether the plant has missed its targets. Malaysia had been due to receive 610,000 doses from Thailand in June and 1.6 million later this year, but its Science Minister Khairy Jamaluddin said on Wednesday "we are expecting some delay." The first delivery to the Philippines, which was promised 17 million doses, was reduced and postponed by several weeks, a Philippine presidential adviser said last week. Thailand, which expects to receive six million doses for June, last week received 1.8 million locally-produced doses and 200,000 imported from South Korea. AstraZeneca has previously run into production and delivery problems in other parts of the world. A deal to set up production in Taiwan did not materialise and it is also facing a legal challenge by the European Union over a supply contract. Do you like the content of this article?
Read More

Tambon accused of graft in purchase of kinnaree-topped street lights