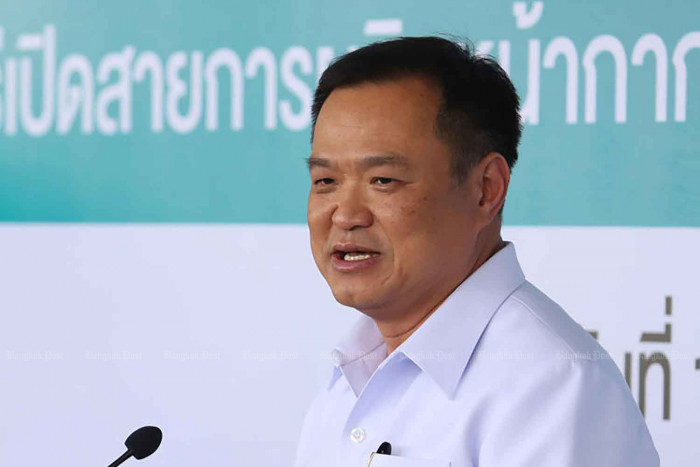 Thailand General Anutin puts his faith in Chinese vaccines published : 14 Apr 2021 at 06:32 newspaper section: News writer: Post Reporters Public Health Minister Anutin Charnvirakul Public Health Minister Anutin Charnvirakul has defended the quality of the Sinovac Covid-19 vaccine following reports that Chinese-made vaccines "don't have very high protection rates". The minister said on Facebook that the issues surrounding Covid-19 vaccines from China had caused much confusion in the last few days and some politicians were exploiting it. "[Thai] politicians with no vaccine knowledge have exaggerated foreign news and claimed the AstraZeneca and Sinovac vaccines that the government has purchased are not effective. "Both vaccines were approved by the World Health Organization for use and many countries have already used them," he said. Concern was raised over the efficacy of China's Covid-19 vaccines after a senior Chinese health official acknowledged the level of protection they provide was not high, before backtracking on the comments. George Fu Gao, head of the Chinese Center for Disease Prevention and Control, told a forum that something needed to be done to address the low protection levels of Chinese shots, according to local news outlet The Paper . Mr Gao has since told China's Global Times newspaper that his remarks were misinterpreted and were only meant to suggest ways to improve the efficacy of vaccines. Mr Anutin said on Tuesday that the misleading information about the Sinovac vaccine might derail the country's vaccination drive, which is expected to be completed by the end of this year. People were free to choose to believe experts or politicians who know nothing, he said. The ministry on Tuesday declared the Sinovac vaccine was 100% effective in preventing severe cases of Covid-19. It will administer the vaccine to MPs and senators on a voluntary basis when parliament reconvenes in May. National Vaccine Institute director Nakorn Premsri said scientists were monitoring the efficacy of all vaccines. In the case of Sinovac, its 50.7% efficacy rate was the result of its Phase III trials with medical workers in Brazil where the pandemic was on the rise. It met WHO standards, Dr Nakorn said -- its efficacy stood at 83.7% among Covid-19 patients with medium to severe symptoms and 100% among those with mild symptoms, he said. Yong Poovorawan, head of the Center of Excellence in Clinical Virology at Chulalongkorn University, said Covid-19 vaccines were approved for emergency use since their benefits outweighed risks. Do you like the content of this article?
Read More

Chelsea into Champions League semis for first time since 2014

Việt Nam is thinking about changing its regional zoning...