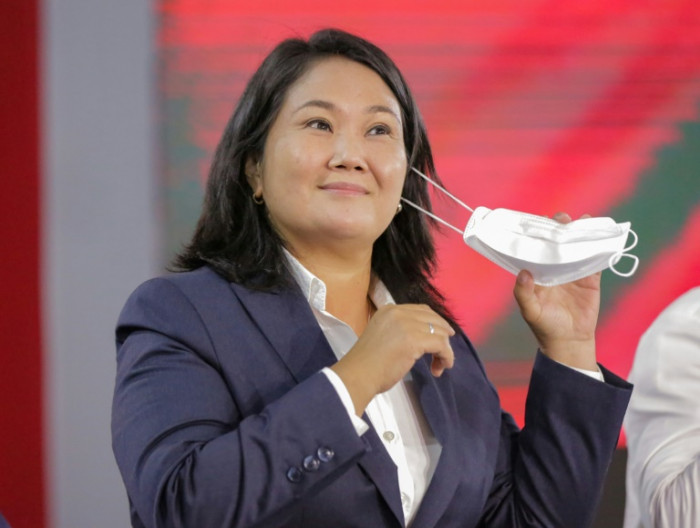 World Amid Peru vote uncertainty, presidential hopeful faces custody published : 11 Jun 2021 at 07:45 writer: AFP Right-wing candidate Keiko Fujimori wants 200,000 votes in Peru's presidential election to be thrown out, and another 300,000 to be reviewed LIMA - A Peruvian prosecutor on Thursday sought preventive custody for corruption-accused presidential hopeful Keiko Fujimori, who is disputing thousands of votes cast four days earlier as she trails in the slow, nail-biting final count. The stakes are high for Fujimori, 46, who faces a corruption trial that would be delayed if she wins her presidential race against far-left rival Pedro Castillo, who is clinging on to a narrow lead. Prosecutors have said they would seek a jail term of more than 30 years for the rightwing populist leader on charges she took money from scandal-tainted Brazilian construction giant Odebrecht to fund failed presidential bids in 2011 and 2016. She denies the allegations, but has already spent 16 months in pre-trial detention. Peruvians were on edge Thursday as it appeared they may have to wait days more for a final result as Fujimori claimed electoral fraud. Late Wednesday, she asked Peru's National Electoral Tribunal (JNE) to annul the results from more than 800 polling stations, the equivalent of 200,000 votes. The tribunal is expected to take about 10 days to weigh the request. Fujimori has also asked for another 300,000 ballots to be reviewed. - Breaking parole - If the JNE rules in Fujimori's favor, it could shift the balance. Rural school teacher and trade unionist Castillo was leading by about 70,000 votes with over 99 percent of the tally completed by Thursday. According to the ONPE electoral body, Castillo had 50.2 percent of the vote compared to 49.7 percent for Fujimori in her third presidential race. Under Peruvian law, Fujimori was allowed to contest the election as she had not been convicted of a crime. On Thursday, prosecutor Jose Domingo Perez asked an organized crime court to revoke Fujimori's parole and remand her in custody for allegedly having met with a witness in the case against the conditions for her liberty pending trial. The witness, Miguel Angel Torres, had accompanied Fujimori to a press conference on Wednesday. - 'Victory' - Peruvians voted on Sunday for their fifth president in three years after a series of crises and corruption scandals saw three different leaders in office in a single week last year. Castillo on Wednesday said party observers considered his triumph a done deal, even as authorities held back on announcing an outcome. "In the name of the Peruvian people," he thanked "embassies and governments from Latin America and other countries" for messages of congratulations on his "victory." Despite there being no official result, Argentina's President Alberto Fernandez on Thursday became the first sitting leader to congratulate Castillo as Peru's "president-elect." The center-left leader said on Twitter he had contacted Castillo and "expressed my wish that we join forces in favor of Latin America. We are deeply twinned nations. I am pleased that the beloved Peruvian people are facing the future in democracy and with institutional solidity." Bolivia's former leftist president Evo Morales sent a message of congratulations, while Brazil's ex-leader Luis Inacio Lula da Silva celebrated Castillo's "victory" on Twitter and said the result "represents another advance for the popular struggle in our beloved Latin America." But Brazil's incumbent leader, far-right Jair Bolsonaro, lamented the possible leftist victory, telling an evangelical event that a "miracle" was needed to stop it. As tension grew, Castillo supporters rallied late Wednesday outside the vote counting office in Lima, while a pro-Fujimori crowd gathered in a park in the capital to denounce vote "fraud." Peruvian authorities and election observers have dismissed any possibility of vote-counting fraud. As in Peru's three previous presidential elections, also tightly-run, the tail-end of vote counting has been slow due to delays in the arrival of ballots in Lima from rural and jungle areas, and from abroad -- where one million of the country's 25 million eligible voters live. Fujimori has taken most of the expat votes counted, but Castillo is popular among rural electors. Whoever wins will lead a nation battered by recession and the world's highest coronavirus death rate, with more than 187,000 deaths among its 33 million population. Two million Peruvians have lost their jobs during the pandemic and nearly a third now live in poverty, official figures show. Peruvians will also be looking for stability, with seven of their last 10 leaders either convicted or under investigation for graft. Do you like the content of this article? (2)
Read More

Tensions simmer in Hong Kong as anthem law back up for...