Thailand on Monday added 89 new coronavirus cases, 73 local and 16 imported, bringing the total number of confirmed cases since the pandemic began to 25,504. No new deaths were reported, leaving the toll at 83. 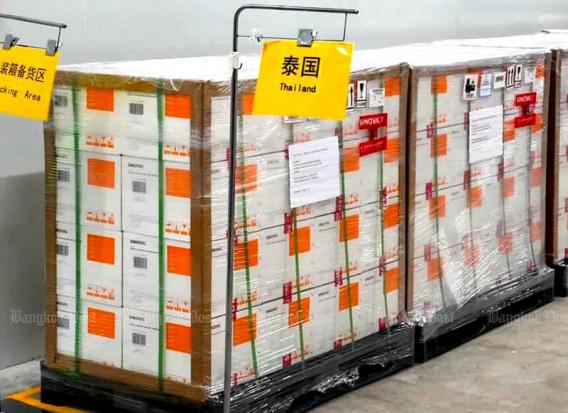 89 new Covid cases confirmed, only 14 from mass testing 22 Feb 2021 at 14:09 0 comments WRITER: R MAY ORIGINAL SOURCE/WRITER: ONLINE REPORTERS Level switch: A photo uploaded by Public Health Minister Anutin Charnvirakul shows Sinovac’s Covid-19 vaccines being prepared for delivery to Thailand. The vaccines are due to arrive on Wednesday. (Photo: Anutin Charnvirakul’s Facebook page) Thailand on Monday added 89 new coronavirus cases, 73 local and 16 imported, bringing the total number of confirmed cases since the pandemic began to 25,504. No new deaths were reported, leaving the toll at 83. The Centre for Covid-19 Situation Administration (CCSA) said that of the 73 local infections, only 14 came from mass testing. Samut Sakhon again logged more new infections than any other province, 31 reported by hospitals and two from active testing, the CCSA said. No new cases were recorded in Bangkok. Tak had 11 new cases at hospitals and two through active testing, while Pathum Thani logged nine at hospitals and nine from mass testing. Assistant CCSA spokesperson Apisamai Srirangson said on Monday health authorities remained vigilant regarding the situation in Pathum Thani and Tak. "We are worried and continued to keep a close watch," she said about the cluster in Pathum Thani that so far has spread from the Pornpat wet market in Thanyaburi district to nine provinces. Dr Apisamai said health authorities were also monitoring Mae Sot district of Tak after a man who drove a truck across the border tested positive for Covid-19. The country reported 16 new imported cases, including seven Thai returnees from Qatar. Infections were also confirmed in two arrivals each from the United States and the United Kingdom and one each from India, Pakistan, Latvia, Portugal and Armenia. Search Copy Vocabulary: cluster : group of people, animals or things close together - กลุ่ม log : to put information in an official record or write a record of events - ลงบันทึก monitor : to regularly check something or watch someone in order to find out what is happening - ตรวจสอบ ตรวจตรา record (verb) : to make a written account of something that is kept so that it can be looked at and used in the future - บันทึก, รายงาน returnee : someone who is "returning" to some place - vigilant : always being careful to notice things, especially possible danger - ซึ่งระแวดระวัง, ซึ่งดูแลความปลอดภัย Do you like the content of this article? Like dislike 0 liked & 0 people disliked it RELATED STORIES Most Viewed Recent LEARNING Articles
Read More

Fire at glove factory will have 'limited' impact on output