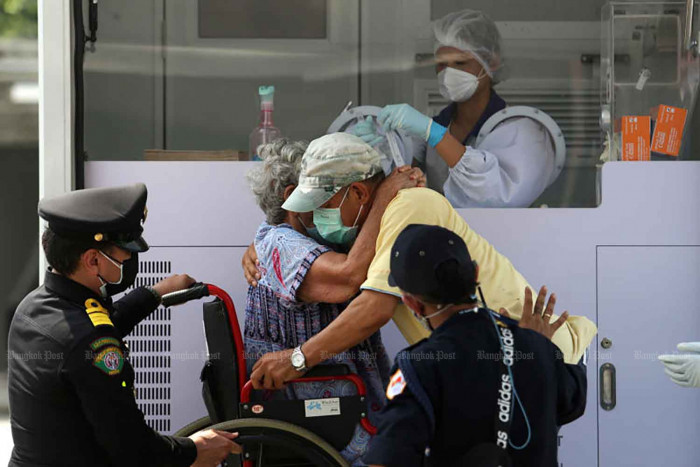 Thailand General 27 new Covid deaths, 1,763 new cases Situation under control in provinces, but not in Bangkok, says Covid centre spokesman published : 4 May 2021 at 12:52 Mass testing for Covid-19 continues at the Klong Toey fresh market in Klong Toey district of Bangkok on Tuesday after a big cluster of Covid-19 was detected in communities in the district. (Photo: Wichan Charoenkiatpakul) Thailand's Covid-19 death toll surpassed 300 on Tuesday, as 27 deaths and 1,763 new cases were added, bringing the toll to 303 fatalities and 72,788 cases. Taweesilp Visanuyothin, spokesman for the Centre for Covid-19 Situation Administration, said 21 men and six women, aged 25-92, had died over the past 24 hours. Eight of them were in Bangkok, five in Nonthaburi province, two each in Lamphun and Samut Prakan and one each in Chon Buri, Ubon Ratchathani, Pathum Thani, Nakhon Pathom, Buri Ram, Surat Thani, Nakhon Si Thammarat, Kamphaeng Phet, Chai Nat and Nan. Twelve of them had hypertension and nine had diabetes. Other diseases among the death cases were heart disease, high cholesterol, thyroid disorder, obesity, cancer and lung and renal disease. Nine of the people who died had been in close contact with infected family members. Another nine contracted Covid-19 from previously confirmed cases. Two were close to infected friends and colleagues. One was a worker at an entertainment place and four had visited risk areas and markets. The 1,763 new cases over the past 24 hours included 1,750 local infections. Of them, 1,519 were confirmed at hospitals and 231 during mass testing. Bangkok logged 562 new cases (down from 675 on Sunday), Samut Prakan 201 (up from 161), Nonthaburi 168 (down from 277), Chon Buri 91 (down from 153), Samut Sakhon 55 (up from 45), Nakhon Pathom 50 (up from 23) and Chiang Mai 41 (down from 55). "The situation is stabilising but people should not be complacent. The provinces have been able to control the situation but Bangkok has not," Dr Taweesilp said. Meanwhile, 13 new imported cases were from India (an Indian man who arrived on April 17), Nigeria (1), Egypt (3), Italy (1), Pakistan (2), Sudan (1) and Malaysia (four Thais aged 12-40 crossing the border through natural passages). Of the 72,788 total cases, 42,474 (58.35%) recovered, including 1,490 discharged over the past 24 hours, and 30,011 were at hospitals, including 1,009 critical patients and 311 dependent on ventilators. "The number of critical patients is rising and people depending on ventilators are in 49 provinces, making up 30% of the critical cases," Dr Taweesilp said. In the third wave of Covid-19 from the beginning of last month, there were 43,925 cases and 209 death cases. Global Covid-19 cases rose by 669,689 in 24 hours to 154.18 million. The worldwide death toll went up by 10,478 to 3.23 million. India logged 355,828 new cases for a total of 20.27 million. Dr Taweesilp quoted analysts as saying that daily new cases in India could be much higher than reported. The United States still had the most cases, at 33.23 million, up 39,767. Do you like the content of this article? (11)
Read More

Thailand stresses the need to turn challenges of Covid-19...

Get a grip on bullying