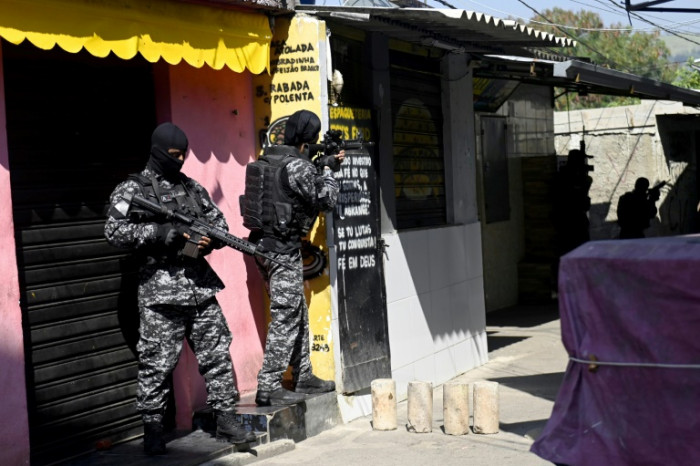 World 25 killed in police raid on Rio slum published : 7 May 2021 at 04:45 writer: AFP Rio de Janeiro police led an operation against drug traffickers that left at least 24 suspects and one officer dead RIO DE JANEIRO - A massive police operation against drug traffickers in a Brazilian favela Thursday left 25 people dead, turning the impoverished Rio de Janeiro neighborhood into a battlefield and drawing condemnation from rights groups. Media reports said a policeman was among those killed in the early morning raid on Jacarezinho, on Rio's north side, where residents awoke to explosions, heavy gunfire and helicopters overhead. Activists and media reports, citing the police, put the total death toll at 25 -- which, if confirmed, would be the deadliest police operation in the history of Rio de Janeiro state, rights groups said. Police identified the other 24 dead as "suspects," but rights groups and academics said there was little evidence to back that up. "Who are the dead? Young black men. That's why the police talk about '24 suspects.' Being a young, black favela resident automatically makes you a suspect to the police. They just keep piling up bodies and saying, 'They're all criminals,'" said Silvia Ramos, head of the Security Observatory at Candido Mendes University. "Is this the public security policy we want? Shootouts, killings and police massacres?" she told AFP. Large groups of heavily armed police could be seen streaming into the favela as frightened residents tentatively went about their business once the gunfire died down, AFP journalists said. Residents reported seeing corpses lying on the pavement in pools of blood, and numerous bodies being taken out in an armored police vehicle, a local community leader told AFP, asking for safety reasons that his name not be published. At least two people were wounded when the subway car they were riding in was apparently caught in the crossfire during the operation, news site G1 reported. TV network GloboNews showed aerial images of armed suspects fleeing from one residence to another in the densely packed neighborhood during the raid, passing what looked like high-powered rifles from hand to hand. Rights groups and residents later inspected the houses targeted, some with blood stains and damage from the shootout. - Child foot soldiers - Police said the operation targeted a gang suspected of recruiting children and teenagers for drug trafficking, robberies, assaults and murders. They said the sting grew out of a surveillance operation that obtained a warrant to wire-tap suspects' communications. That led them to identify 21 gang members "responsible for ensuring the gang's territorial dominance," they said. The group "had set up a war-style structure with hundreds of 'soldiers' equipped with rifles, pistols, grenades, bulletproof vests, camouflage fatigues and other military accessories," they said. The neighborhood is considered a base for the Comando Vermelho, or Red Command, the iconic beach city's biggest drug gang. However, rights activists questioned why recruiting minors -- a common practice among Brazilian gangs -- would lead to such a deadly operation. There were also questions about the timing: the operation came despite a Supreme Court ruling barring police from carrying out raids in Brazil's impoverished favelas during the coronavirus pandemic except in "absolutely exceptional circumstances." Police did not immediately respond to a request for further information on what led to the raid. - 'Predictable outcome' - Rio, a city of 6.7 million people, is notorious for its violence. Rio de Janeiro state was placed under military intervention in 2018 in a bid to rein in the violence, which includes a troubled history of deadly police shootings. Last year, at least 1,245 people were killed by police in the state, according to ISP, Rio's public security institute. That was down from a record 1,814 police killings in 2019, but still higher than, for example, the 1,127 people killed by police last year across the entire United States. "It is unacceptable that Rio de Janeiro's public security policy continues to bet on killing as a strategy," said the Igarape Institute, a think tank. Robert Muggah, the institute's co-founder, said the deadly raid was "the predictable outcome of years of belligerent tough-on-crime rhetoric" from pro-gun, far-right leaders including President Jair Bolsonaro and Rio's recently impeached governor, Wilson Witzel. Do you like the content of this article?
Read More

Saudi to allow around 1,000 pilgrims to perform hajj: minister